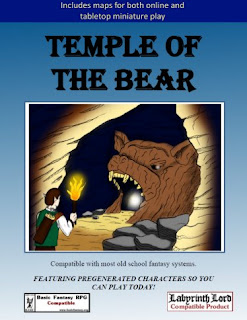 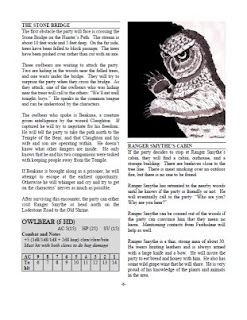 Presumably they head for the Temple of the Bear (pointed the way there by a friendly forrester, pretty much like all the ones based in Adela). It's an aptly named place, since pretty much all the monsters there are bears or bear hybrid monster (like the owlbear). Ultimately they get to the bottom of the source of the attacks, which is an evil magic-user and his family (which I think is the villain in about 80% of the Sharp Mountain Games modules).

Although meant for 7th level characters (that's what the pregens are), all the encouters are with monsters of less than 7 hit dice. I realise Labyrinth Lord and Basic/Expert characters are somewhat weak, but generally I think parties can handle monsters 3-4 hit dice more than their level. The villain is a whopping 4th level, though he does have two wearbear relatives and a bear that paralyzes with a glare (Glare Bear).

It's a bit longer than most previous SMG modules, with 15 or so encounters/areas, including a couple of wilderness encounters on the way. It's mostly combat, there's a trap and not really much in the way of exploration. There's literally almost no loot, just incindental stuff. 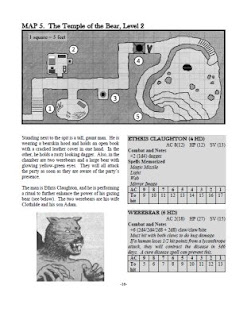 Like other modules from Sharp Mountain Games, it comes will all sorts of additional maps for use with a Virtual Table Top. It's mostly illustrated by the author, whose art has gotten a lot better the last couple years.

Temple of the Bear is almost completely unremarkable, other than its bear theme (and lack of loot). If you need a temple full of bear creatures, you might have a look, but it's the least creative module from Sharp Mountain Game, most of which have at least one or two interesting bits.