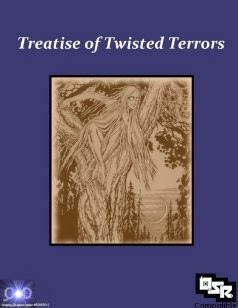 Treatise of Twisted Terrors is the first product from a new company, QuasarDragon Games (they've since followed it up with a Pay What You Want Module, PO-1: The Stolen Child). It's a monster book with 70 new creatures based on critters from folklore & myth. For the most part, not the usual stuff, either. All the obvious monsters have already been covered in monster manuals and folios, so this tackles a number of more unusual/obscure beasties. Those that have been used already have a different interpretation here.

It's not meant for any specific game, but a general "OSR" type of rules. In practice, it mostly seems to follow a 1e format: Frequency, # encountered, in lair %, combat stats, and so forth. Armor class is given as descending only. Most monsters don't have much in the way of treasure, and if they do, it is noted in the monster's description. There is also an illustration of each monster, taken from public domain sources, so the quality varies quite a bit.

Mythology from all over the world is used to draw from. African, American Indian, Aztec, Inuit, Melanesian, Philippines, but probably at least half come from various European regions, ranging from the usual suspects (Germany, Scotland, England, etc), to Asturias (Celtic Northern Spain) and the Slavic region. It also features a couple of monsters from cryptozoology, most notably the chupacabra.

Much to my delight, it features a local monster, the Piasa Bird. It's sort of a mix of a manticore, pertyon, and wyvern. It has a bearded human head with antlers, scaled body, feathery wings, and a stinger tail. Its origin and exact nature (does it have wings or not?) are somewhat questionable, but it has been depicted as a cliff painting since at least the 1600s.

Other highlights include the proverbial dragon and princess (Cuelebre and Xana), two different goat-women (Aguane and Glaistig), a wereorca (Akhlut), and a variety of undead. The draugr and rusalka are fairly well known (the former a norse revenant, the latter an undead woman that drowns people), but also the Baykok, an undead hunter that is a skeleton not completely stripped of flesh and some different types of vampires, ghouls, and zombies. There's also quite a few domestic fairies and spirits.

A couple of monsters are extremely tough. The famous Lambton Worm is almost tarrasque-esque, with an armor class of -10 and 25 HD, regeneration, poisonous bite, and swallow whole on a natural 20. By comparison the Gashadokuro, a 75 foot tall skeleton, is only 15 HD and armor class -2, though with a nasty bite attack that can sever heads on a natural 17 or better. Thankfully, the rest are much more manageable.

There's one monster entry per page, which does mean some excess white space, but also means it's much easier to use and read. As mentioned, the art is all public domain stuff, and one illustration (not of a monster) was clearly the inspiration for one of the full page pieces in the original Dungeon Masters Guide 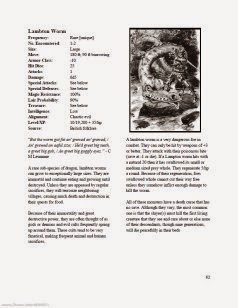 One of the tricky things about taking monsters from folklore and mythology and using them in D&D is that you need to turn something that is not real into something that is real. Folklore creatures are not just not real in the sense they don't really exist, they are often unreal, things that don't make much sense. Faeries are a good example of this - elves, goblins, even brownies and pixies were supernatural entities almost more like ghosts or spirits than living, breathing creatures. But in D&D they became the latter, somewhat magical in some cases, but by and large, living, breathing, eating, drinking flesh & blood creatures.

That's my only complaint about this book (and a slight one), it doesn't seem to go far enough to making these creatures D&D style monsters, sticking too close to the original folklore and mythology. Though with that said, the last portion of the book is full of suggestions on how to use each monster in a D&D game. At $2, this is really a steal.