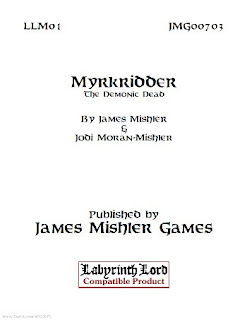 Myrkridder: The Demonic Dead is a small supplement from James Misheler detailing a new type of undead monster. The name sounds like it's something from folklore, but a google search didn't turn up anything except one mention on an RPG blog  which seems quite different. Maybe it means something in German? I dunno.

At any rate, they are undead animated by demonic (or devilish) spirits and thus are intelligent. More than anything, they remind me of the deadite army from Army of Darkness. There are six different types of them, though 3 are just increasingly more powerful variations of the same type, undead soldiers. You have the regular rank and file member (2+2 hit dice), then a sergeant (3+3), and finally a champion (7+7). While the latter two have some minor magical powers, all three primarily attack with weapons, doing base weapon damage. I'll admit that I mostly play 1e, but a 7 hd monster only doing weapon damage (so probably 1d8) seems a bit low even for Basic games. If nothing else, they should have some sort of strength bonus, perhaps a +1 for every hit dice they have.

Two of the other two types of Myrkridder go together. The Outrider, basically a scout, and the Carrion Horse, the skeletal horse it rides. Both have 3+3 hit dice and a high (bad) armor class, so are not particularly tough foes, excepting that carrion horse can fly. The last variant of the Myrkridder is the hag. They range from 5+5 hit dice to 7+7 hit dice and also cast spells as if they were a magic-user of that level, but also able to cast reversed clerical spells. 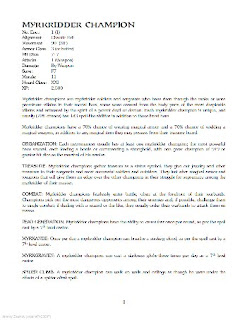 While the myrkridder is perhaps a bit bland as a monster by itself, there is a list of 20 specific, unique myrkridders, complete with pesonalities, history and in some cases, customized abilities. Highlights include Goldbelly, who swallows gold and runs the risk of spewing it all out when stabbed in the stomach, Garm the Wolf, who is literally part wolf, and Pete o' the Bog, who was a bog sacrifice. By far these myrkridder are the ones I would use in the game, as opposed to the standaard ones.

Although not in the original release, an updated version contains rules for using the Myrkridder as a racial class. At 1st level, they start with 2+2 hit dice and gain one per level up to 8th level, where progression stops. They also gain a special ability almost every other level, which is simply a random spell.

The PDF lacks art, but is otherwise pretty clean looking. I'm not sure if the lack of art is by design or lack of  funds for art. There is a fair amount of free art, some of it might be usable here.

While really not an essential buy, for a buck it's a pretty good deal, considering that seems to be the going rate for a new class alone, much less new monsters. The best part is definitely the unique myrkridder section, you could use them as unique, unusual encounters or villains.
Posted by Jeremy at 5:52 AM