Monsterarium Review — Two Handfuls of Monsters, One Handful That Is Useful 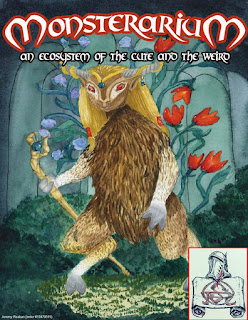 Monsterarium is a short monster book from Knight Owl Games, written by Ahimsa Kerp and illustrated (and written) by Nahid Taheri. Although usable in pretty much any OSR game, it's really meant for Lamentations of the Flame Princess and so the creatures tend to be low powered, with most hit dice being 5 or less.

The eighteen monsters are a mix of real work monsters from Persian folklore as well as some made up stuff and some re-imaging of existing monsters (the faun and night hag).  They are separated into two different sections, "Monsters" and "Creatures of the Wood", the first being likely encountered anywhere while the latter are in an enchanted forest type deal. Though there is some overlap, a "Peri" from Persian folklore is in the "Monsters" section, but its rules is in the "Creatures of the Wood" section. 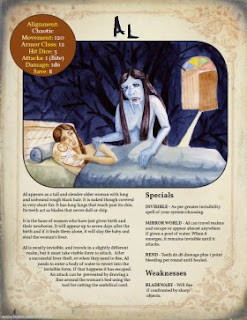 Part of the thing about adapting creatures from folklore is they are often more "things that go bump in the night",as opposed to flesh and blood monsters that groups of armed people can kill. Sort of the difference between Call of Cthulhu and D&D, where the solution to the monster of the week is finding a ritual or spell or something to get rid of the monster, while in D&D it's usually just killing it.

That is case with the Al, which preys exclusively on pregnant women and newborn children, and this books version of the night hag, which just sits on a character and steals his sleep. And there is the cord leg, a classic creature that looks like a woman asks for help being carried home and then tries to kill you when you do, in this case, by strangling with her legs.

For more traditional D&D you have the ejdohogo, sort of a peacock dragon, and the loot wyvern, which is like a mini-wyvern that lives in piles of treasure. There's a lich queen, but compared to a normal D&D lich, is more like a lich toddler.

The rest are sort of more "What do I do with that?", neither really from folklore nor the D&D sort. Like the tremulous troll, who stays in her cave all the time.  Or the flying goldenfish (not goldfish) who fly around a deserted city apparently waiting for adventurers to come eat them like sardines, or the harpy summoner who summons harpies to fight against the patriarchy. 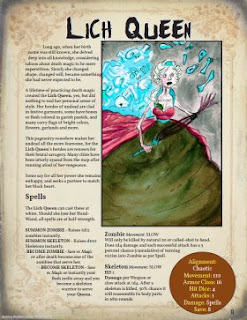 Other than the cover piece, most of the art has that primitive/abstract look favored in many unofficial LotFP products. I don't get it and I don't generally like it (I like art that looks realistic), but at least it's original and there are some nice pieces. And as PDFs go, it defaults to the most usable setting, single page and fit to height, so no aggravation when you open it..

To me, this book just isn't terrible useful. At least not for your standard D&D game. Probably not even for Lamentations of the Flame Princess. The most useful monsters are probably most useful for horror or monster of the week style game. And the rest just aren't useful, period.

Even with the original artwork, I don't think $5 ($3.50 when I bought it) for 27 pages (maybe 20 of actual product0 and 18 monsters is a great deal, not when you have things like the Creature Compendium for $2 and Teriatic Tome for $7 that have tons of monsters and art.  Especially as the thing with monsters is that ideas for them aren't that hard. Folklore is full of them, not to mention movies, TV, and countless stories It's the stats that what I pay for.
Posted by Jeremy at 1:55 AM