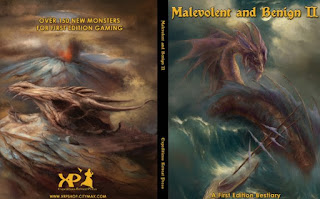 Malevolent & Benign II is the second monster book from Expeditious Retreat Press for OSRIC/1e featuring 150 new monsters. It could be more accurately called "Mostly Malevolent" since as in most monster books, it's mostly stuff for the player characters to kill. As with the first volume, it collects many of the monsters from their Advanced Adventures line of modules, though the bulk are original to the volume.

Each entry consists of the statblock (which lists chances for treasure by name, not letter code), then "General Information" (which includes special attacks and such), then "Languages", "Physical Description", and then "Variants", though sometimes the 2nd and 4th are omitted where they aren't applicable. I have seen similar formats, but it always makes more sense to me if the physical description of the monster are first, because it helps to visualize it while reading about the attacks and such. 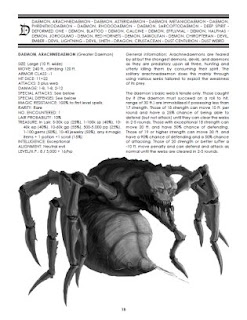 The variety of monster is pretty good. I can't even begin to cover them all, so I will just point out the ones that stuck out to me one way or another. There's a half dozen or so new daemons and demons, almost that many new devils. The daemons closely follow the official ones, in name (pseudolatin, I guess) and stats. While I've always felt they were invented to provide a challenge beyond the rather weak demons and the somewhat tougher but still a bit weak devils, there are both weaker and stronger ones here, giving them a wider range of power, although the weakest are still 6+ hit dice. There are also elementals for each of the quasi-elemental planes, plus a few inhabitants of said planes.

There's a new sort of outsider, the "Horror" introduced. These are somewhat Lovecraftian entities from another plane (a new one, too), called "The Other Realm" and they have a completely new alignment as well, "Special", as they are beyond good and evil. In practice though, they don't seem like monsters of cosmic horror, just grotesque. For instance, there are a couple of them based around eyes "Walking Eye" and "Eye Scorpion", and another one is made up of internal organs ("Offal Horror"). 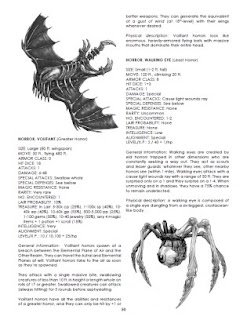 Among the more terrestrial style monsters are a number of new faeries, some monsters drawn from folklore, and variations on existing monsters. Although I seem to be a minority, I dislike the idea of faeries in D&D (or even fantasy) as otherworldly, supernatural beings. To me one of the things that Tolkien, Howard, and later EGG did was to say that stories and mythology of faeries and such had the basis in real life, flesh & blood creatures, albeit perhaps slightly magical. In D&D you see this by brownies and leprechauns being strains of halflings with pixie-ish blood in them, and kobolds being little reptile-dog dudes instead of mine spirits.

So I didn't like the dozen or so faerie creatures in this book. They include the classic red cap and blue cap, plus the African Eloko, a couple variations on sprites (that don't look like little people, but vegetation).  I also didn't like the idea of the "Caducean", the offspring of a Dryad and her charmed lover which is basically an ascetic hermaphrodite gnome that grows to an adult after a year. I guess it gets rid of child support payments, at least. 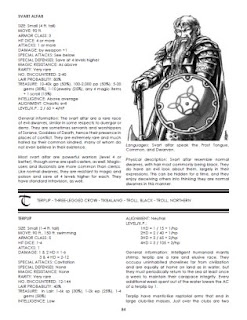 I do like most the new variations or types of old monsters. I think I have seen the Greater Medusa before, but basically it's like the Medusa from Clash of the Titans, upper woman is snake headed woman, lower part snake. I also quite liked the new type of lich based on a druid or illusionist instead of cleric or MU, though it's not too different than the standard lich.

There are a couple of new trolls, which are probably more troll of folklore like than the 3 Hearts and 3 Lions D&D Troll. I also liked the idea of the crossbreed creatures, basically a mix of two existing monsters, but there are only 3 of them and probably should be named "hybrids".

A new type of dragon, sort of a proto-dragon is introduced: the wyrm. They are tougher than traditional dragons in terms of hit dice and armor class, but lack a breath weapon, instead having a magical bite. The most interesting (I think) is the Enslaving Wyrm whose bite can possibly charm victims, up to a total of 100 hd per age level, so would make an excellent major villain.

There's a bunch of assorted monsters that don't fit into any neat category, like the zombie children "Children of Coyle" or the "Squatgrunk", which are like evil amazonian dwarf morlocks. Perhaps the oddest are the "Terplip", 4' tall intelligent mantis shrimp. 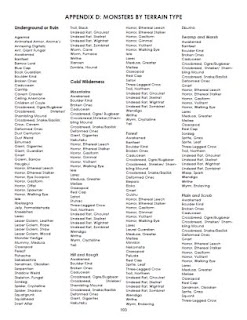 The PDF uses a mix of original and stock artwork, often repurposed (which is something I know I do). The only one that seemed glaring to me is a picture of the Dover Demon used as a Basilisk/Snake crossbreed. It's fully bookmarked, though defaults to the dreaded (at least for me) "single page continuous" and "fit to width".

As with pretty much all their OSRIC products, the entire text (sans OSRIC and other trademarks) is open content, and Section 15 is manageable in length, so it's very easy to use in a product, should you be inclined.

Like all monster books, ultimately their value comes down to how much of it will you use in your game. Whether directly or as inspiration for adventures or dungeons or whatnot. In this case, while most monsters are original, many have already been used in adventures (some that I've run) so their usefulness has been proven. The rest might not have the appeal of the classic monsters but the number of useful monsters is pretty high, so I'm pretty happy with my purchase.