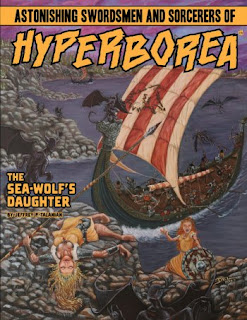 As a huge fan of Lovecraft, Clark Ashton Smith, Robert Howard, C.L. Moore, etc, I liked the general premise of Astonishing Swordsmen & Sorcerers of Hyperborea, that is an OSR based sword & sorcery game inspired by the pulps, but I have found the game to basically be a incoherent mess, both thematically and rules wise, taking random stuff from everywhere and just dropping them down into a giant mess. It's like how Michael Bay makes movies.

The Sea Wolf's Daughter is pretty much the distillation of this, as well as being, what in computer/video game RPGs, an escort quest. The PCs are engaged to rescues Gunnhildr, the daughter of a Viking, taken by another Viking. But upon infiltrating the stronghold, they discover that she's freed herself, escaping to the dungeon being the kidnapper's lair. But she doesn't want to be rescued, she wants to go on her own quest, which just happens to involve exploring said dungeon.

It seems that when she was a baby shieldmaiden, her mother was killed by a flock of nightgaunts, the Lovecraftian monster. In Lovecraft they were servants of Nodens (who was semi-friendly to man) and were known for tickling people (I wish I were making that up, but nope, apparently they were from a childhood dream of his). Here they are somewhat more like the xenomorphs from Aliens, spawned by a queen and apparently just killing people randomly (because they are evil). 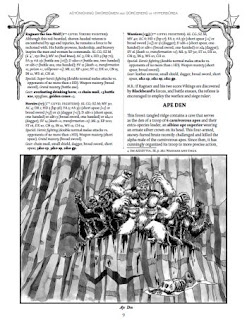 The dungeon of the nightgaunts is pretty short and linear and of course, features other mythos monsters thrown in for no real reason, like two graffiti artist Elder Things. At the end of it, the PCs (well, the Viking girl) have a confrontation with the nightgaunt queen.  This is only half the adventure, though, as the rest occurs when the PCs (presumably) destroy what is essentially a nightgaunt queen egg which transports them to the edge of the world, where there is a superscience-y fortress.

This is a bit more interesting, as there's really no driving plot for the PCs to necessarily do anything, but wander around and explore the place.  Perahps wandering is overstating things, since basically each level (there are 9) are just rectangles, six squares high and about 30 wide.

Ultimately, the PCs discover that these strange people have been luring nightgaunt queen eggs (like the one that brought the PCs here when it exploded) to Hyperborea as part of a plane to keep out the AS&SH version of Cthulhu. So they are put in a quandary, do they stop the machines that sucks in the nightgaunt queen eggs and keep baby nightgaunts from running amok all over Hyperborea? (Which is not a problem I realied affected Hyperborea, before this module). Or do they stop that and potentially let AS&SH Cthulhu in? 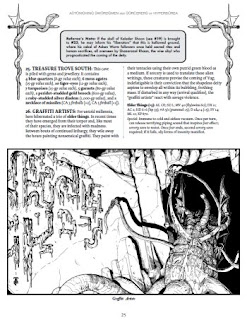 One thing that irked me, is this quote from the author, about the no-win scenario at the end. "Well, this is Hyperborea, my friends, and sometimes there is no winning, only suffering and doom."  The real Hyperborea, by Clark Ashton Smith, might have been grim and gritty, but there was a strong current of black humor running through the stories.

But even so, it's not like the players really care one way or the other.  They don't have any grudge againt nightgaunts. They don't have any land or kingdom and a need to prevent nightgaunt attacks or for that matter, stop an invasion from Cthulhu. If there's really no stakes for the PCs, there's really not gotcha. (And as a aside, let's not forget that Conan was eventually a King, and Jirel of Joiry was a Countess or something, so domains aren't necessarily foreign to pulp sword & sorcery)

Anyway, like most recent AS&SH adventures, it features original, but not very good art, apparently trying to mimic '70s era comic books for some reason, and not the art of the old pulps (which admittedly was scant, but of pretty decent quality).  I really found the prose style pretentious more than tone setting, with phrases like "may likewise cognize this place as a haven for the antithesis of weal". 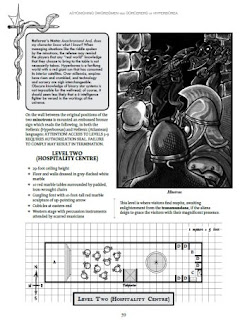 The Sea-Wolf's Daughter might have made a decent story, but is essentially just a sight-seeing adventure for players. First escorting the Viking lady on her quest, then just visiting a complex and probably not doing anything. There is some really solid loot, from a PC's point of view, including a girdle of giant strength and a portable hole, arguably the most useful of items. While it introduces a few new monsters, it overuses those from Lovecraft. This really highlights the dire need of a monster manual for AS&SH.
Posted by Jeremy at 11:56 PM