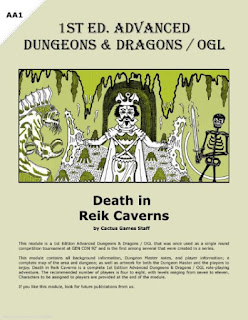 Death in Reik Caverns is a modern day rarity, an OSR module actually meant for 1st Edition (either actual AD&D or OSRIC). In truth though, it's not so much OSR, as old school. It was an AD&D module used at Gencon in 1992, though in a way, it feels much older with that, more like '79, as it completely uses standard monsters and has a rather pedestrian premise — archmage dies, monsters come in and take over his lair and use it as a base to raid a nearby town. However, its true age is betrayed by a number of 2e-isms sneaking through, which honestly does represent how a lot of games were played then, using both 1e and 2e material somewhat haphazardly.

It's meant to be set in Greyhawk, dubbed "Darkhawk" here, but the tiny included map includes Maure Castle, Cairn Hills, Safeton, and Abbor Alz, all unchanged from Greyhawk. Still, it doesn't literally use the Darlene map. It is however set in a new town, Breehaven, 2 hexes away from Greyhawk. At least as far as I know it is new, I was never really into Greyhawk beyond the original folio and early modules. 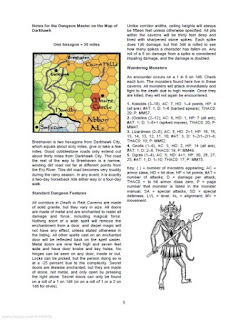 The dungeon is a large single level, 85 rooms. It's essentially split into two different types: natural caverns that have been infested by various humanoids and such, and then the actual stronghold of the dead archmage, which features regular rooms and contents you'd more expect from a wizard's lair.

The cavern part is remarkably non-linear and easy to get lost in. There's one curious area where the party can cross a large crevice by jumping on pullars in the middle of it. However, there is a corridor bypassing this just to the north. While it was never was a serious obstacle to reasonably experienced parties with rope, it's strange to see an obstacle with a bypass literally right next to it.

There's not much in the ways of puzzles or stuff to fiddle with, but there are a number of traps, mostly pits, so 10' poles are likely quite useful.

The types of monsters ramp up gradually, starting with kobolds, then goblins, then ogres. Lots of ogres, lead by a fire giant. The final boss of the dungeon is an adult red dragon. But he's not your standard 1e adult red dragon that could be killed by a halfling with a really lucky shot, he's the much tougher 2e style, with 17 HD, very low armor class, and magic-resistance, to boot. Almost all the monsters are from the monster manual, with the lone exception being a Fire Toad from Fiend Folio.

Treasure is both sparse and lavish. Characters won't get rich from coins or gems, but they will pick up a large number of high plussed magical weapons, no fewer than 7 +4 weapons (and one +5 as part of the dragon's hoard). Magic-users will have to make do with a handful rings of protections and a wand or two.  Like the monsters in Death in Reik Caverns, the treasure is all "by the book", nothing unusual or unique. 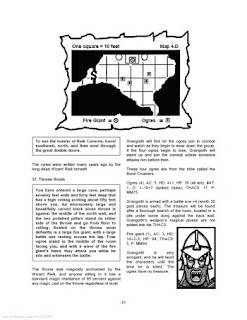 The module is illustrated, but the quality is on the low end. Still, there are a few nice pieces and there's one funny picture of a character running from a dragon. The map of the dungeon is well drawn and designed, but it's also split into two parts right smack in the middle of the module, which is a pain. And worse, if you try to extract the images via copy and paste, they come without their room keys for some reason.

The layout of the module is pretty much functional and frill free. Thankfully it's set to "Single Page" which is nice, almost everyone goes with "Single Page, Continuous" which means you have to change it to display single pages as soon as you open it. What's also nice in that in encounters where tactics or monster placement matters, there is a little blow-up of the map.

The included pre-generated characters, all around 8th-11th level, are kind of strange. The 3 single class fighters (one actually a ranger) all are exceptionally strong, with the lowest having a 18/97 strength. Conversely, they lack magic armor and have an AC or around 2 to 4. One is wearing chain mail, and another, a ranger is wearing leather (he also has a ring of protection +3).

There are a few rules oddities. One fighter uses a battle axe that does 1-12 vs large (it should be 1-8) and furthermore uses it 1 handed. While I actually count it as a one handed weapon in my game (and use the halberd for a 2 handed axe) for whatever reason, official AD&D and even Basic D&D calls the battle axe a one handed weapon (even though with those stats, no one would ever use one). There is also a gnome illusionist (apparently an obese one at 136 lbs) that uses a wand of frost, which is a no-no. (Unless it's a 2e thing)

While I am not a lawyer, I've always been interested in the OGL and how it is used. To this day, very few products use it correctly, yet this is probably the the most incorrect use of it I've ever seen in the OGL's 15 years of existence. If this product doesn't get taken down, then it's a sign that WOTC/Hasbro does not give even the slightest care anymore. Still, I guess that's why the module is released somewhat anonymously by "Cactus Games Staff".

Death in Reik Caverns is not a bad module, but is just sorta "meh". You'll likely be thinking "Haven't I done this before", or possibly "I am 9th level, why am I still fighting kobolds, goblins, and ogres?". On the other hand, some people can't get enough of fighting kobolds, goblins, and ogres. It's a little pricey at $8 for a PDF, but given it's an 85 room dungeon, it's not a bad value, overall.

However, I'm not sure if it's something I want to run for my players, at least as is. Although my players are only 7th level, I'm pretty sure they could breeze through this. I mean, the G1-3 series was fortresses full of giants for a slightly lower level range than this. This has one giant. Presumably the pre-gen characters make it more even with their terrible armor classes, but how many 7th level fighters in your game don't have magical armor? The average armor class of the fighters of my players is -4. An 0gre would need a 20 to hit them.
Posted by Jeremy at 5:25 AM