Giant's Perch Review — It's Not a Huge Fish 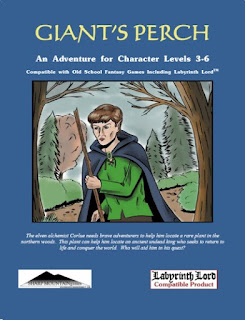 Giant's Perch is a short adventure for Labyrinth Lord, written and illustrated by John Frederick of Sharp Mountain Games. A couple years ago I bought another adventure from him, Witch of Tariswoods which was good but not great. Both adventures use the same town as base, though it's not really described here save for a tavern. (He's also released 2 more adventures, all available in a 4-pack for $6 total)

Also like that adventure, this has a couple of wilderness encounters, then a small dungeon. It's pretty much linear, the party has the first wilderness encounter, which then leads them to the next, then finally the dungeon. Basically they run into an elf being attacked by frogmen, they rescue him, who enlists them on his quest to find a magic flower.

This then takes them on a search for a tree person, but finding his home, they find out he's been kidnapped and his girlfriend is being attacked by bandits. Presumably they rescue her and she tells them where he's being held. So then off they go to rescue him. He is not actually being held in a dungeon, but the characters have to pass through one to get to him and the titular Giant's Perch, which is a landmark where a giant used to sit a lot..

There are only 5 combat encounters. Two involve frogmen, one involves bandits, one skeleton, and the last is the showdown with a 5th level magic-user and two "octobats", who are 8 HD monsters. Nice use of new monsters, though frogmen is perhaps not earth shatteringly new. The octobat is pretty unique, though, basically flying octopi.

The supposed level range is 3rd to 6th, but all of the encounters save the final showdown are probably more suitable for 1st level characters. The frogmen and bandits encounters could possibly all be dealt with each by a sleep spell. On the other hand, the final encounter is probably suitable for 4th or 5th characters. Besides the magic-user, the octobats are pretty tough, with 4 attacks (though they won't use all of them because they are carrying someone) or spray acid for 3d6. Treasure is pretty skimpy, except for the boss magic-user, who somehow is carrying 2,000 gp. Even if you are using 100 coins to a pound, that's kinda a lot. 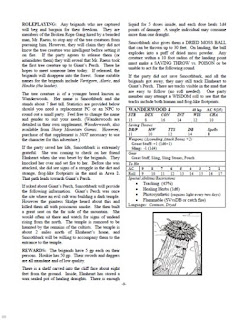 The illustrations are a mixed bag. Some are actually quite good, like the picture of the frogmen, while some of the portraits are not great, though I've seen worse from supposedly professional artists. The maps are really nice though and probably the main draw of this product. It's really meant to be played online and it comes with separate downloads of all the maps for use with virtual tabletop programs.

The author gives both ascending and descending armor class, and for the latter, he's also helpfully provided a little "to hit" chart for each monster (and character).

Giant's Perch doesn't feel like a complete adventure, it feels like the opening section of an adventure. With that said, it's got some quaint charm to it, is pretty cheap (cheaper if you buy the bundle), and might be worth a look if you play games online because of all the extra maps.