The Last Candle Review — A French flavored Keep on the Borderlands 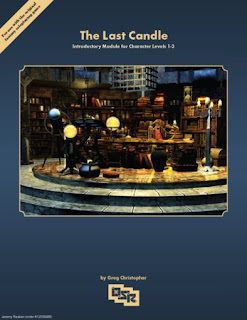 The Last Candle from Chubby Funster is part mini-setting, part dungeon. Unlike most such things that have something of a generic but vaguely English medieval/fantasy theme, this one has a French flavor, reminding me of Clark Ashton Smith's Averoigne (which of course was used for X2 Castle Amber) and C.L. Moore's Jirel of Joiry.

Essentially though, you get a brief sketch of the region and a somewhat more detailed look at a priory (basically an abbey or monastery), the "last candle" of the module's title, as it's the last bastion of a psuedo-Christian like faith. This place is apparently meant to be the home base for the characters while they explore/loot the local dungeon (described in the last part of the module), the Eagle's Eye. Then there are several pages of adventure hooks and wilderness encounters 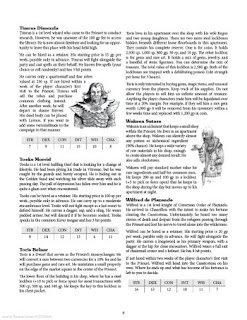 This dungeon was once a dwarven fortress or clan hold, though there isn't a lot that reflect its ancestry, as its dwarf days are long past. By and large it's just a series of rooms with no overall theme. There are clusters that are related though. For instance, there's a magic-user who came to the place to summon a demon and hired some bugbear body guards. They are all in different places and now at odds at each other.

The map is very non-linear, essentially a rectangle of corridors with clusters of rooms (which is how I try to design my dungeons). All in all it is a good mix of exploration and strange stuff and encounters that may or may not result in combat. Including some encounters the PCs should be smart enough to avoid. Though probably won't. It's fairly good sized by modern standard, around 60 rooms. 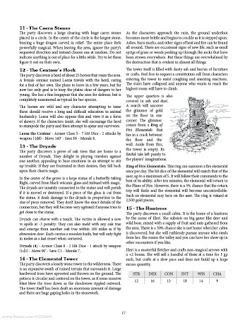 There really isn't any new monsters, but there are some variations of classic ones. Like the timber troll (the monster the PCs should probably avoid) or a flying shock snake (okay, that probably qualifies as new). More inventive are the new magic items. My favorite being the "bead of the sea", which unleashes an olympic sized pool of sea water when broken.

It's meant to be an introductory adventure and uses a fairly generic OSR format that doesn't really fit any single system. It uses armor class starting at 10, but then it has morale based around 2d6 from B/X. While it mostly uses the gold standard, here and there it seemingly uses silver instead. Most notable is a lack of alignment as well as "tests" which are apparently just a name for ability check (which is the term I thought all classic D&D games used). 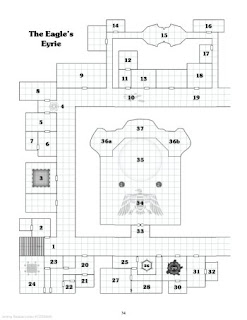 It mimics the look of the Basic/Expert era modules, at least for the font and layout. Virtually all the art is taken from Outland Arts stock packages and you've probably seen it all several times as it's probably the most commonly used stock art due to the price ($10 for a lot of good quality pictures). It's used in moderation though. The campaign map of the region is really nice, with an brown on yellow old parchment look. And as a note, the PDF defaults to fit to height and single page which is the best for using on a computer.

I have somewhat mixed feelings on this. The dungeon itself is very good, but the setting, particularly the home base, is somewhat sterile and to the extent it has a personality, is dour and unfriendly. I realize the original keep in Keep on the Borderlands was similar, with none of the NPCs even having names, but it seemed welcoming. I can't help but think of the Abbey in CAS's The End of the Story. The protagonist downfall was started by the abbott being too friendly and welcome, letting his guest see someone he shouldn't have. Here, any hospitality is grudging at best and seems likely to result in the PCs sacking the priory when they are high enough level.

Regardless of the rest of the setting, the fullish sized dungeon itself is a steal at $4