Advanced Adventures #24: The Mouth of the Shadowvein Review 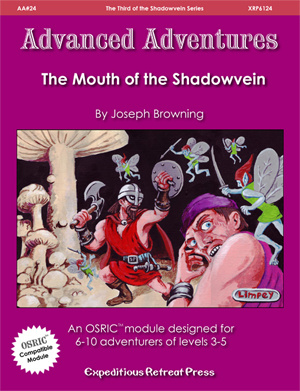 Just like AA#23, after a map of the area and random encounter tables, there are five locations detailed, a mix of large and small entries. The large areas are the Caves of Insanity (almost 4 pages) and the Cavern of the Pod God (6 pages), with a crashed UFO being 3 pages and a mining camp and an ambush rounding things out.

As the Caves of Insanity is home to a 20th level Lich, the PCs probably won't be exploring it thoroughly, though it's entirely mapped out and keyed, all the same. And to a large degree, it actually lives up to the name, even the design of it is somewhat unsettling to look at.

The real meat of the module is the Cavern of the Pod God. It's set in a huge cave and thus almost a hex crawl within a hex crawl. In something of a twist, the Pod God is not something the PCs will want to defeat, it's a good mushroom god.

At the end of the book you have new monsters and magic. Some (half) of the entries are duplicated from AA#23, namely the Noja (a friendly type of bugbear) and their animals, but there are three new ones, including a robot found in the UFO. The new magic items are good and do include a couple of technological artifacts.

AA#24 uses the usual style similar to that of the old TSR modules. Perhaps a little bland, but at the same time very easy to read and write notes on (at least the print version, which I have), making it probably the most practical style of format for adventures. There's not a lot of interior art, but what there is is excellent, as are the maps.

As I said in the review of AA#23, this is somewhat tricky to review because it's not really a complete module, but half of one. I think things would have been better had this module been entirely based in the Cavern of the Pod God, since that's what the bulk of it is anyway. Removing the repeated material could have expanded that cavern a good deal, which is somewhat sketchy in places.

As a stand alone adventure, this gets a C+, but combined, the two Shadowvein adventures get a B.