Tomb of Rakoss the Undying Review 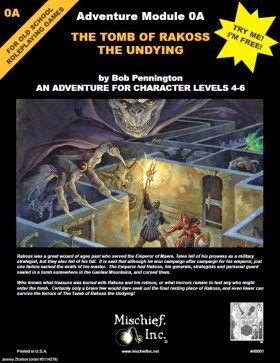 The Tomb of Rakoss the Undying is the premiere product from Mischief Inc (they've since followed it up The Inheritance), a short dungeon (well, tomb) adventure meant for old school D&D and its modern clones (aka OSR). It was free, then became a pay what you want product. I don't generally review free or PWYW products, since you can just download them yourself and see. That is, unless I happen to run them, which I did just recently.

Quite a lot of space (2 pages) is devoted to the background of the tomb and setting up the adventure. It basically boils down to "an evil warlord-wizard dude builds a tomb and this old guy hires you to explore it". While part of me appreciates the detail and effort they spent, in reality, people will probably be dropping it into their own gameworlds, so it's probably better to be vague and brief.
Although "OSR", they didn't use any specific game system like OSRIC, Labyrinth Lord, or Swords & Wizardry (to name the most popular), but just a generic format. Looking at the stats of the monsters in the game compared to various OSR games (and of course, the original games) they seem to be somewhat overpowered.

For instance, a Flesh Golem having 60 hit points instead of the usual 40, and two attacks doing 2d8+5 each compared to just 2d8. Same with other monsters. While seemingly not a large difference, OSR characters tend to not have a lot of hit points. 2d8 twice (and considering the Flesh Golem attacks as a 10 HD monster, it's quite possible it will hit twice) would do an average of 18 hit points, while 2d8+5 twice would do an average of 28. It also features a much, much, much higher armor class than the usual Flesh Golem, with an AC of 20(or 0 descending) instead of the usual AC of 9.

As to the module itself, the map is rather linear, with one main path, really. It starts with a branch, but the eastern path is very short (two rooms). The description of each room is quite detailed, and there is the traditional (if not always liked) boxed paragraph to read. The monsters are mostly traditional, but there was one new monster, Brimstone Apes, as well as a new type of guardian statue.

For the most part, this mimics the style used in old TSR modules. It features a lot of stock art by Jason Walton inside and a nice cover by Storn Cook. Oddly, the maps are right in the middle, making it a bit unwieldly to use (the PDF, anyway).

I ran this with mostly a 4th level party (I ran this before AA#26 Witch Mounds):  A 4th level Paladin, 3rd level Cleric/Ranger, 3rd level MU/Thief, 4th level Bard (Dragon #56, mostly), 4th level Hunter (2e Ranger), 4th level Warlock (my own creation based on an OGL version) and three henchmen (Once someone has a henchmen, they all want one)— 3rd level Fighter, 1st level Cleric/Fighter Dwarf, and 1st level Rogue (2e thief).

It was fairly manageable until they came to the room with the Flesh Golem. Then it was almost a total party kill. At least of the characters that didn't run away and stayed to fight to cover the escape. It clobbered several characters, averaging nearly 20 hp a round. Finally, with 2 characters left standing, they killed it. Thankfully no one was completely dead.

The new monster, the Brimstone Apes also chewed up the party somewhat, taking down two characters, as they had 3 attacks — Claw 1d6+6/Claw 1d6+6/Bite 1d8+3. Amusingly, it was the two survivors of the Flesh Golem fight that went down (and again, no one was completely killed, just knocked below 0). Once that was finished though, the rest of the module was pretty easy.

As a mini-module it's not bad, but I think they would be best served if they used stats more in-line with traditional values rather than ones closer to third edition (where hit points for PCs are much more plentiful). I also think perhaps some of the background material could have been excised in favor of more dungeon, especially as this is a mid-level module. Introducing a setting and various details about it makes more sense for a starter module.

Since it's Free/Pay What You Want, I'm not grading it, grab it yourself and see. But for the most part, we had a good time.