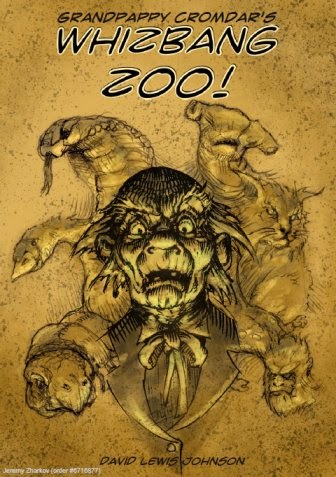 Grandpappy Cromdar's Whizbang Zoo! is a module from David Lewis Johnson, who is perhaps best known as an artist, including some of the art that Kevin Crawford (Sine Nomine) put into the public domain after his successful kickstarters for Scarlet Heroes and Spears of the Dawn. You've probably seen a treasure chest he drew — it's been used in a number of OSR products (including one of mine).

As you might guess by the name, it's something of a gonzo style product. The zoo in question is literally a modern day sort of zoo, complete with many modern items, albeit a trashy zoo meant for tourists and that has apparently broken down, Westworld or Jurassic Park style. So it's perhaps not suited for your usual D&D game, even though it's statted for it (no specific system, but the armor class starts at 9).  Seems almost like it's best suited for something like Mutant Future or possibly Starships & Spacemen 2e, though the tech level is modern, not futurisitc.

Similarly, the new monsters (22 of them) are mostly chimerical sorts of mutant animals. For instance, the Hazbroca seems to be part cobra, part orca or at least dolphin. The floppelope is part walrus, part giraffe, and part peacock. The muggerbeak is part gorrila, part turkey. The quincy raptor is part lynx, part kangaroo. Not all, though. Some are alien creatures, though most seemingly have some similarity to an Earth animal. Besides the usual stats you also get what they smell and sound like, as well as their hobbies and turn-offs.

The monsters take up about half the PDF, with the dungeon the remainder. It features 91 keyed locations spread over three levels. The level of detail ranges from just a line or two to a long paragraph. The rooms are pretty much what you'd expect in a zoo — various animal pens and cages, gift shops, bathrooms, etc. Then all sorts of rooms dedicated to employees — offices, rec areas, kitchens.

As mentioned, the zoo has apparently had some sort of catastrophe, so you find the inhabitants in areas they shouldn't, along with bodies of tourists and employees everywhere.

While it features a lot of art, it's almost entirely that of either Cromdar himself or in the new monster section. There are no illustrations in the adventure section. The maps are really nicely done and precede each keyed section of the dungeon, though unfortunately, no player's maps.

It's meant to be funny. Like most humor, it's really in the eye of the beholder. As a module though, it's best used for players that like exploring strange places and surreal situations, as there isn't much in the way of loot. But even then, most of the stuff in the dungeon is simply mundane stuff. Finding a toy squirt gun in a dungeon is probably not too exciting to anyone, at least when it's obviously a squirt gun. Similarly, the monsters also seem to be a little flat - neither really comical nor scary. More a carnival sideshow than Alice in Wonderland.

Ultimately it's a solid product, but I think it should have been even more gonzo, at least the dungeon itself. I think as it is, the DM will have to spice things up a little, as well as add more loot/cool stuff to find.