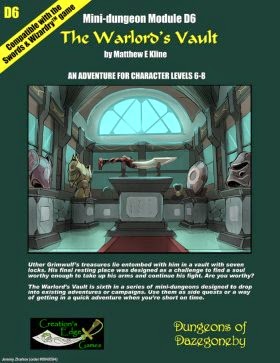 The Warlord's Vault is the 6th in the Dungeons of Dazegoneby line of modules from Creation's Edge Games, meant for a party of 6th to 8th level characters. The modules are for Swords & Wizardry (a Original D&D retro-clone) and are meant to mimic the modules TSR put out, at least in the general sense. They are more like mini-modules, to run for a single session, in this case 13 pages total, including map & credits page.

The setup is a bit non-traditional, being almost like a game show. The warlord of the title was a great adventurer and when he died, a friend created a tomb to serve as a proving ground to see who deserved his magical gear.

In order to reach his tomb, and more importantly, his gear, the PCs have to knock down 7 prismatic walls, essentially similar to the prismatic sphere spell. To take down each wall, you need to either cast the spell that counters it (which is probably not an option for the PCs, since most are higher level than this module) or use a corresponding prismatic key, which are found in various parts of the dungeon.

Though there are only 6 keys, with the final part (violet) being a door needing to be opened either by a character with 18 strength, or having continual light being cast on it to counteract it. (Note: This is actually one of those minor things that changed from OD&D w/w Greyhawk to AD&D 1e, which is what I use. In 1e, it was dispel magic the countered the violet part of a prismatic wall. Sometimes the minor differences can cause problems, though in my case it was a moot point, since it was opened by a character with 18 strength.)

Most of the keys are guarded by monsters, though in one case, it's a simple riddle. The monsters are pretty much standard fare - a medusa, a troll, owlbears, a manticore, a water elemental, and one fairly tough battle with a flock of harpies in a cavern full of piercers. I ran it with a 6th level party and they found it quite easy, except for the battle with the harpies and piercers. The piercers hit really, really hard. The water elemental encounter was also made somewhat easier by the party having just come from an underwater adventure, and so had magic to let them breath/operate underwater. (There is a new monster, a Prism Golem, but you only fight it if you don't use the keys)

There treasure is pretty good and non-standard for the most part. There is a platemail of etherealness (pretty much thes best armor in 1e, dunno about S&W) but the rest is original — dragonslayer's armor that lets the wearer make the first save (a day) against dragon's breath; a shield that turns into a lion once a day; a +1 sword that is +4 vs demons and heals the wearer a tiny bit (4 points) every time it hits a demon; and a "phoenix charm", piece of jewelry that restores someone to half their hitpoints when killed (it works once for a wearer).

The Warlord's Vault is a clever idea, but perhaps a bit too easy for its stated levels (even taking into account the differences between 1e and S&W). I would have liked to have seen more battles with 2-3 opponents rather than several with single opponents and one with well over a dozen. Also would liked to have seen some non-combat encounters besides just the puzzle.