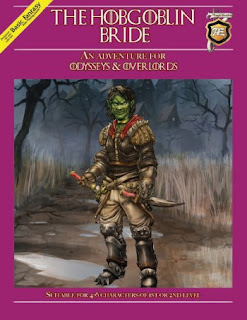 I like adventures and I like short, cheap adventures, since they tend to be easier to use. Aegis Studios has put out a line of those for their Basic Fantasy RPG based Odysseys and Overlords, but for the most part, they have been unspiring and formulaic.  Get a Dyson Logos map (a tiny one at that), slap down a few encounters with standard low level monsters, pad the page count with a long cut and paste intro about the setting and the system licenses and boom, you have a module.

The Hobgoblins Bride by Megan Irving sticks to that formula, but manages to transcend it, at least somewhat, it's still limited in scope. The premise is that a bunch of hobgoblin women have been kidnapped by an all male hobgoblin band. One of the lady hobgoblins manages to escape and seeks help to rescue the remaining ones. Which the party is asked to do. Here it's somewhat assumed the PCs will do it because they are good and a church asks them to. I'm not sure that's a good enough motivation for typical old school players.

Essentially it's a small ruined fort (or maybe large sized house) turned into a lair. There's ten rooms. The vast majority of them are simply hobgoblins but in a nice touch, all the hobgoblins are described. Maybe not enough to pick them out of a police lineup, but enough to differentiate them before the PCs kill them (though stealth may be an option).  The lady hobgoblins decriptions are more detailed and they have personalities, too.

It's perhaps a small thing, but it's a nice touch, rather than just "2 Hobgoblins". The rooms and loot are also similarly detailed, though the loot is more or less largely worthless in all but the most miserly of OSR game systems ("in my day, we were lucky to get 2 coppers for killing a dragon and we liked it!". The highlight is a magic sword that casts light.

I also really liked one wilderness encounter. It's just a weird monolith that has a weird stone buried beneath. It's not explained what it is or what it does. It's just mysterious. 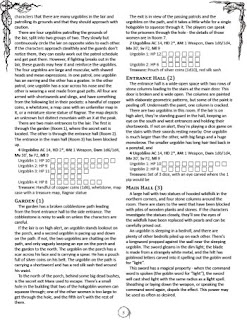 On the flip side, other than the other wilderness encounter, with cave men, all the encounters are hobgoblins. I know it's "The Hobgoblin Bride", but it's repetitive. It's logical - there are patrols, a sleeping area, etc. But still just hobgoblins.

Like all other of these modules from Aegis Studios, it's plain looking, mimicking the somewhat spartan design of the Basic Fantasy RPG line, including the little boxes for hit points like BFRPG modules. There's no interior art.

In general, the Odyssey & Overlords adventure lines feel like a job you'd find listed in Amazon Mechanical Turk (not a great way to make money, BTW), basically saying (in this case), "Write a 3 page adventure based on hobgoblins using this map". There's probably not a whole lot of room for creativity, but the author went beyond the minimum. I'd like to see something longer or less restrictive in scope. But still, this is definitely a better entry in the line and worth the $1 it costs.