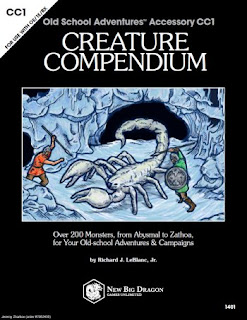 You can never have too many monsters, or for that matter, too many monster manuals. Some say you should always make up your own original monsters, but to be honest, I think most people's creativity is naturally limited in scope. At least I tend to think along certain lines, and one of the reason I like other people's monsters, characters, and places is that they are things I wouldn't have thought of.

When creating new monsters, the catch is, all the easy monsters have been created. D&D borrowed quite a bit from folklore and fantasy fiction, not always describing things true to the source, but the inspiration is often recognizable. It also had many original items that really captured the imagination, despite being somewhat silly in nature. The owlbear and gelatinous cube for instance. It can be a hard act to follow, as Fiend Folio showed...

Creature Compendium from Richard LeBlanc and New Big Dragon Games is a really good try, featuring 200 new monsters for old school D&D. Some are taken from folklore (some pretty obscure), one is from a movie, but I think most are original. It has an almost ludicrously low price of $2 in PDF, which is even more astounding given that it has a lot of original artwork by the author.

Even though the older editions of D&D are very similar, they are still a bit different, and it can be somewhat tricky supporting multiple flavors. Having purchased a previous product from New Big Dragon Games, the adventure module VA 1 Valley of the Five Fires, I was impressed at the length the author went to include stats for virtually all of the old school editions. He does the same thing here, supporting 1e, 0e, B/X and their most popular retroclones. While monster stats basically come in two flavors (one for 0e/1e and B/X), the treasure and experience values are given for each different game.

As to the monsters themselves, there are way too many for me to cover. But there are several I would use in a game. The Abysmal is very creepy, basically an octopus with a human head that walks. The Giant Spider Gorilla is one of those rare combination animals in the vein of the owlbear that works well.

The Linnorm is essentially an alternate take on the dragon, more of a snake like beast with a poisonous bite. There are six different types with the size changing the stats (and number of limbs) it has. The Ymir is a Harryhausen monster from the William Hopper movie, 20 Million Miles to Earth. There are a couple from modern day folklore, like the Mothman and Dover Demon. There are some additions to classic D&D monster types, such as the Raja Naga and Russet Pudding and all manner of animal mummies.

A few seem a bit clunky, such as the cyclorc, basically a cyclops orc, or the skunkbear, basically a giant bear/skunk combination. But those are relatively rare. 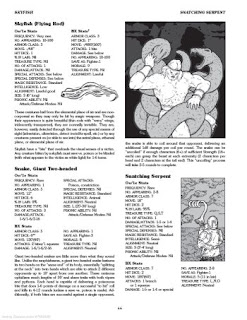 The book (well PDF) is very professional looking, at least by a mid-80s standard. It greatly resembles an early TSR Basic D&D book. As mentioned, it's lavishly illustrated by the author. I'd say his best is far better than the worst I've seen of some professional artists working in the OSR (and with that, I've probably insulted the author and some of those artists). On the other hand, the PDF doesn't have bookmarks, so you have to find a monster manually. It's not too hard since they are in alphabetical order, but still, it's about the only negative here.

All in all, you'd be hard pressed to find a better deal period, getting a huge monster book for $2, complete with illustrations. Even if the monsters were terrible, it would be a good deal, but that's not the case, you can probably use at least half of them. It's certainly more useful than Fiend Folio (and I would say, has better art). If you are a self-publisher, it's also nice because the monsters are open content (far too many monster books have a lot of restrictions, making it impossible to use the monsters in an adventure). If anything is a must buy, the Creature Compendium is.