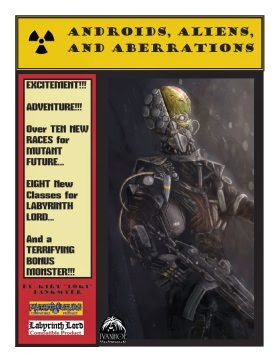 Although I never played Gamma World as much as D&D as a kid, some of my favorite gaming memories were of a game of it set in a theme park. While it seems like every incarnation of old school D&D has been retro-cloned over and over, there's really only one Gamma World retro-clone, Mutant Future. Fortunately, it's very well done, if not terribly well supported by material (third or first party). Still, a few products for it come out, and this one, Androids, Aliens, and Aberrations is essentially a bunch of new player races. There is also some support for Labyrinth Lord, but it's mostly a Mutant Future product.

The new races are mostly things from pop culture. The Ender and the E9000 are basically the Terminator and the T-1000 from the Terminator movies and the Evolved human which is the big headed sort often found in science fiction (that one Planet of the Apes movie where they blew up the world). There is the Grey alien from UFO lore, a Reptoid, and a Serpent Noble from the weird conspiracies of David Icke (where the world is ruled by lizard people). Lastly there are three races inspired by the Fallout series, the most interesting of which is the "Rotter", essentially a ghoul, a person who looks like they are dead but are not. Not goths, but walking, semi-rotten corpses. 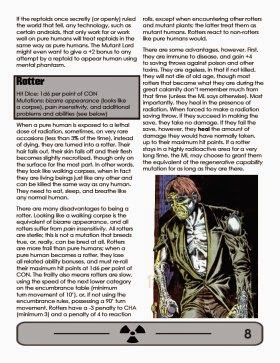 While you can use these in Labyrinth Lord, they are more guidelines to convert them, rather than full fledged write-ups.

The layout uses a bunch of public domain images taken from comic books and some used by creative commons. All in all, it has a look of an old pulp magazine. There's also a more mobile friendly version.

For a dollar you get a bunch of races that fill in a lot of missing gaps among player races not filled by the regular Mutant Future rules. So if you are a fan of the game, it's well worth picking up.
Posted by Jeremy at 5:23 AM