The Beast That Waits Review—Overlooked Gem 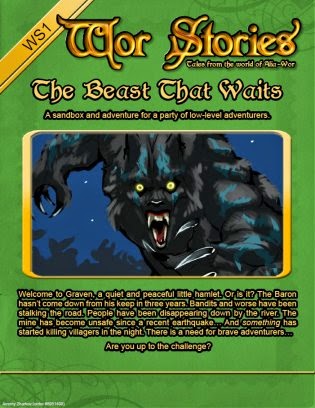 Somehow I missed this product, The Beast That Waits from Three Sages Games, using the Sword & Wizardy (Complete) Rules. It apparently came out in the summer of last year (2014) and I just didn't notice it. I'm kicking myself, because it's essentially my favorite sort of gaming product, and it's extremely well done. It is a mini-sized sandbox setting. While a sandbox, it's not simply a collection of random tables (though it has those), but a well described location that the PCs can explore and interact with more or less at their leisure.

It's centered around a small village named Graven. The place has a lot of problems, and has been increasingly cut off from the outside world. Presumably the PCs will want to reverse that by exploring the country side, dealing with the various dangers. There are four wilderness areas to explore (well, one is really farms), two dungeons, and the village itself.

Much of the wilderness is table driven, rather than a hex crawl. There are separate tables for day and night in each area, and eventually the PCs can "clear" the area by killing off (or making friends with) everything. The dungeons though are fully described and keyed. One is the keep of the ruler of the area and is relatively small, clearable in a session, while the other is a combination of mines and ruins below the mines. This is large and could very well take two or three sessions to go through.

The town is really the central part of the adventure. Not just geographically, but it has several likable PCs. Most notably the family that runs the local tavern/inn, but also the other merchants and farmers in town. This goes a long way towards motivating characters to solve the problems of the town.

It includes a lot of tidbits of additional material. New gods and godesses. Three new monsters as well as a playable race. The latter is is form of cat people, but it's not the eye-rolling cute kind, they are a warrior race, fierce rivals of gnolls. There's also handy tables for generating weather and names for villagers. And there are a lot of hooks for future adventures, some of which apparently tie-in to other products, but it's not clear if they are print only, or are future products. 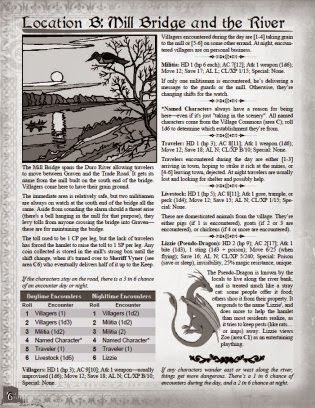 While at first glance, this module seems somewhat light in tone, there's actually some rather dark stuff regarding the actions of the villains. Deeds that are often glossed over in gaming supplements, but all too common in the real world. The villains here aren't just cartoon evil, they are really evil. While a traditional fantasy setting, it does refer to Atlantis a few places, as well as a lost empire, and Mitra is one of the new gods, so would not be too out of place in a more sword & sorcery style setting. It also seems like it would be a good fit for Beyond the Wall and Other Adventures...

The PDF really looks nice. The layout is quite fancy, using a two column traditional layout, but with a lot of art and frills like boxes and scrolls. Still very readable. The quality of art is a bit cartoonish (not a criticism, a style) and a mix of original art and stock art.

At $4.20, The Beast That Waits is really a steal. You can pay half as much for just a few rooms. This on the other hand is essentially a low level or starter campaign, and the quality is really excellent.