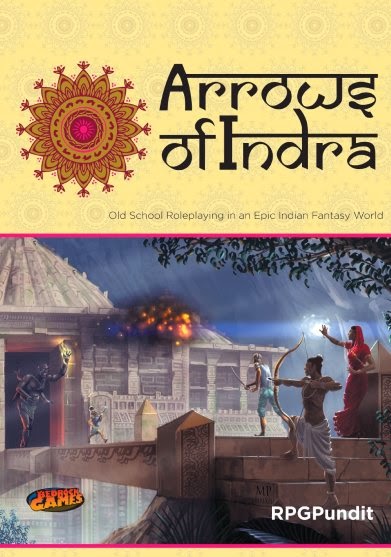 Arrows of Indra is an old school renaissance (OSR) game set in Mythic India. If you know old school D&D, Arrows of Indra is probably closest to Original D&D (the little brown books, aka OD&D) with the 1st supplement (Greyhawk) in how it plays. So like more like Swords & Wizardry than anything else, especially as it only uses a single saving throw. But with some 1e conventions, like fighters having d10. There are also some things taken from 3e, such as ascending armor class (though that was originally in the 1990 version of Gamma World) and the skill system. Also quite different is the magic system, it's not "Vancian" where characters must memorize spells beforehand.

Since this is more like OD&D, not Basic D&D, characters have both race and class. While mechanically all the usual classes and races are there, they are used to represent archetypes and beings from Indian lore. Instead of an assassin, you have a thugee. Instead of a monk, you have a yogi. Instead of elves, dwarves, and hobbits, you have gandharvas, yakshas, and vanaras.

Although these are analogs to traditional D&D classes and races, they are different in practice. While a thugee might be essentially an assassin, they aren't evil, exactly, because they only kill for the goddess Kali. Similarly, while there is a short race that is analogous to a halfling, it's a little monkey person, with a personality more like that of the dreaded kender than something out of Tolkien.

Are they a perfect fit? Perhaps not, but on the other hand, the D&D elf, dwarf, and halfling are not a perfect fit to their source material, either.

Old school D&D had a lot of different skill systems. Proficiencies (based on rolling under an ability score on a d20), d100% skills for thieves, x in 6 for racial skills, and vaguely defined secondary skills. Most OSR games use a unifying system, often one not taken from old school D&D.

Skills also act somewhat like the old weapon proficiency system for fighting classes. As characters gain more skill in a certain weapon, they do more damage

Alignment only has a single axis, like in OD&D, but instead of Law, Chaos, and Neutral, there is Holy, Unholy, and Neutral. This describes whether a character follows the gods, the asuras (demons) or neither.

This follows old school conventions more or less. You won't need miniatures or a battle mat.

As something of a lower tech setting, armor class starts at 12 as opposed to 10. Armor otherwise has the traditional values (leather is +2, etc), so it's easy to add in armor from other sources if you want, it just starts at a different point.

This is the one area where Arrows of Indra delves into completely new ground. Gone is the Vancian system of memorizing spells in advance, or even having a spell list.

Instead, you have spell like abilities that can be performed a certain amount of times a day. The catch is that these abilities are determined randomly.

There's also a random chance of getting more enlightenment powers (basically special abilities) when you gain a level.

Most fantasy games are set in a fictional world similar to our own, often simply themed with a culture. Usually Europe, but sometimes African (as in the excellent Spears of the Dawn) or Egyptian (Green Ronin's similarly excellent Hamunaptra for d20). But Arrows of Indra isn't set in a fantasy Indian pastiche, it's set in the mythic days of India, based on the Mahabharata. So more akin to products based on King Arthur or the Trojan War.

D&D has borrowed a lot of basic concepts and names from Indian lore, but often second hand, so a a lot of things are similar, but different. For instance, the Rakshasa in D&D is taken almost entirely from the old Darren McGavin show The Night Stalker. But here, it's truer to the Indian original. So ironically, for a D&D clone, you have to forget certain D&D-isms, at least when it comes to monsters.

Aside from the aforementioned Rakshasa, there are about a 100 creatures, both monsters and mundane animals. Asura, Deva, Garuda and a number of others you've probably heard of, as well as a handful of ones you haven't.

All of Mythic India is described, but the level of detail is more at an overview level. A paragraph or so about each place, for a total of about 8 pages (plus regional maps). Considering the size and scope of India, it's perhaps a little scant, but it covers all the basics.

The underworld, or Patala, is also described. This is essentially 7 underground worlds inhabited by Asuras. This can be viewed as a "megadungeon", and there are tables to randomly generate levels there, though not very complex ones.

You also get random encounter tables for various types of terrain.

The layout is largely simple and readable, no fancy backgrounds or overly stylized fonts. There are a few attempts at formatting the text around an illustration which don't quite work and so look rather odd, but by and large it's a decent looking book (or PDF).

I didn't notice any typos, but there seems to be some editorial confusion when it comes to using quote marks. In the same page, high caste appears as "high caste", "high" caste, and high caste. I'm not an editor, so I don't know what is right, but just pick one and stay with it.

Although it's a little pricey at $12.99 in PDF compared to comparable rulebooks, Arrows of Indra is a very good set of rules. It's a very solid and playable take on old school D&D, taking its basics and adding in some modern convienences, though the randomness in character's abilities as they level might rub some the wrong way.

On the other hand, as a framework for running a campaign it's not quite fully featured. About the only real tools given for creating adventures are tables for making a cave complex in the Patala Underworld (and not overly complex ones at that). What else do characters do?  As my only exposure to India is watching some vacation slides from a relative 30 years ago, I'm at a total loss as to what an Indian game would be like.

When confronted by an atypical setting for a game, it's best to provide more comprehensive tools, hooks and perhaps a sample adventure. Sine Nomine's Spears of the Dawn really shines in this regard.

It also has some value as simply a sourcebook, even if you don't plan on running a game based on it, there are quite a few monsters and a lot of new magic items that can provide an Indian flavor to another OSR rules set.

While you can certainly question the designer's decision to base the rules so heavily on old school D&D, particularly the mechanics of the classes and races, he's fully realized that decision with the rules set. It might be a square peg in a round hole, but he's managed to fit it in quite well. But what to do with that rules set is another matter, especially as it seems to be an "orphan" product, with no more products in the line and basically no other Indian themed OSR products. You're basically on your own, and while some might be up for that challenge, I think most will find it somewhat daunting.