Free version of Godbound Out

While his games are not quite to my tastes (except Spears of the Dawn), his business practices are probably the best in the industry — having drafts of his Kickstarters written beforehand, releasing art from his Kickstarters into the public domain (and thanks to the artists for that as well). But now he's gone and released a free version of Godbound, his game about playing gods (or really powerful heroes).

Also have a Sci-Fi version of the rules on Kickstarter. I liked that one starship FF book a lot.

While I hate C&C and don't think it's particularly old school, Luke Gygax apparently did some work on the Undercaverns of Gaxmoor


FRS1 The Dalelands - 2e Sourcebook for the part of the Forgotten Realms into NASCAR. $4.99, 64 pages

World Builder's Guidebook - Remarkably useful book for designing a campaign setting. Nothing mind blowing, but lots of charts and tables. $4.99 and 96 pages.

One Page Dungeon Compendium 2015 - While I think the format really kinda sucks for producing usable adventures (reminds me of haikus, too clever for its own good), I seem to be in the minority. PWYW

They Met in a Tavern -  PWYW one-shot adventure with pregens. 18 pages

SL&vl #1 - Seems to be some OSR fanzine in Finnish.  43 pages, PWYW. Strangely, despite clearly being foreign, the suggested price is a $1
Posted by Jeremy at 12:56 AM No comments:

From Chaotic Henchmen Productions comes Motley Jerks, a collection of pre-made characters for 1e/OSRIC for use in tournaments and the like.

Not just the characters, but all the fiddly details, proficiencies, age, spellbooks, languages,

OTOH, need personalities or background? Well, you're outta luck there.

Also curiously, most demi-humans are single-classed. That was something of a rarity in tournament modules (or even just in games), part of the point of demi-humans is they can multi-class (and also because single class thieves just suck)
Posted by Jeremy at 2:15 AM No comments:

Last week was quite busy. This week? Not so much, highlight being a huge monster manual from Random Gamers Guild


Greyhawk Wars -  I think this is more a Battle System supplement than anything else. 40 pages, $4.99

H2 and H4 The Mines and Throne of Bloodstone. Crazy high level adventures. $4.99 each

WG9 Gargoyle - Introductory adventure for the post-Gygax Greyhawk. $4.99 and 36 pages

Dwellers in Dark Places -  This is a rarity, not only is it something for OSRIC, it's a huge product, a giant monster manual containing 340 monsters. $18 and 400 pages and looks like a lot of illustrations.

PC8 - The OSR Amazon Warrior -  This is a fairly straight forward conversion of the 3rd Edition class from Judges Guild back to 1st Edition. PWYW

B/X Labyrinth Lord Bestiary 6"x6" Cards (A-J) - Because monster manuals are too hard, I guess. PDF is free, but you can spend $24 to get them in print form

The Hero's Journey Character Sheet - For the retro=clone about playing a 70s Arena Rock band. Free
Posted by Jeremy at 1:04 AM 2 comments:

Warriors of the Red Planet Review — Improves on OD&D 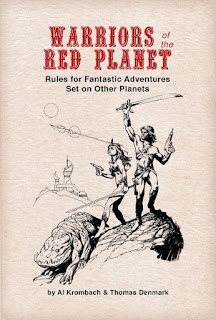 Dungeons & Dragons was firmly rooted in the Barsoom stories of Edgar Rice Burroughs and to a lesser extent, other sword & planet stories. There actually was a game from TSR released during the OD&D era called Warriors of Mars, which was something between a miniatures game and an RPG, but that apparently ran into legal trouble and was pulled from the market.

So sword & planet was mostly ignored (save a few Dragon articles) until Dark Sun came out, a fairly popular setting at least until TSR went under. Unofficially there have been a few attempts to make D&D with the genre. A bootleg version of TSR's Warriors of Mars using more D&Disms by "Doc", an OSR version of Swords of Almuric (based on Robert Howard's novel of the same name), and an appendix in my retro clone. But the most ambitious is these is Warriors of the Red Planet by Al Krombach with Thomas Dennmark doing illustration and layout. It released a while ago on Lulu, but now is out in PDF form, both there and RPGNow/DTRPG/OBS.

Pretty big week if you like adventures. Which I do.

HWA3 Nightstorm - Last module in a trilogy of linked adventures, this is set in an pseudo-India inside the Hollow World. $4.99, 64 pages.


A1 A Forgotten Evil -  Mischief Inc is back with another adventure, this time for level 1-3. They've promised to make this more old school than past efforts. 36 pages, $9.99

A1 A Forgotten Evil (Illustration Book) - You'd think $10 would cover illustrations, but apparently not, for $4.99 you get an additional 8 pages illustration book.

F1 The Tomb of Rakoss the Undying (Illustration Book) - Presumably for their first adventure, which came out a couple years ago. $4.99, 8 pages.

Five Lairs -  Another entry in the Five ___ series from Harbinger games. Like it sounds, these are five lairs (very, very small dungeons) you can drop into your game. 26 pages, $2.99. I wonder if they will do Five Liars in honor of the Arduin Guy's mistaking a typo for monsters having a truthfulness rating.

The Mines of Wexham -  I think that was also the name of the annoying kid (er, piglet) on Pigs in Space: The Next Generation. But also it's a dungeon crawl for Z.E.D.  from the old days (so old, the original author is deceased). 19 pages, $3

The Treasure Vaults of Zadabad - An Island Crawl for Swords & Wizardry. 64 pages, $8


Art of Nod - There are a lot of great things in John Stater's Nod e-zine. I wouldn't say the art was one of those things, but if you disagree with me and want to use some of that art in your projects, here you go. Contains images from issues #27, 28, and 29 and is only $1.99 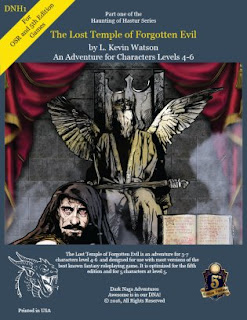 The Lost Temple of Forgotten Evil is an adventure from Dark Naga Adventures who seems to be the author, L Kevin Watson, though it's published by Fat Goblin Games. The name is a bit of a mouthful, clearly going for the old school naming method of The _____ (dungeon type) of ______ but perhaps having one too adjective too many. It's actually a dual statted adventure, both for 5th Edition and a generic "OSR" which is clearly AD&D, but possibly more 2e than 1e based on the power level, as the opponents have a lot of hit points. In any event, it's aimed at 4th to 6th level characters.

The Forgotten Evil in question is perhaps not so forgotten to most readers, it's Hastur, of Robert Chambers and H.P. Lovecraft fame. Or perhaps more Hastur as envisioned by August Derleth. Not the surreal, decadent Hastur of Chambers, nor the unspeakable and largely undefined horror of HPL. Instead, it's just a generic cult that grabs people and sacrifices them.

Quite a busy week with a lot of adventures, 3 from Creations Edge games, one of my favorite module creators.


G3 Hall of the Fire Giant King - Monochrome version of the last Against the Giants adventure. $4.99, 22 pages.

S1 Tomb of Horrors - The classic death trap, though I really don't think it's that hard. Just don't do anything stupid. 36 pages, $4.99


Ghosts of Graygrim -  Another mini-dungeon from Creations Edge, this time for level 8-10 characters. 15 pages, $1.50

The Cruelest Mistress of All (OSR Version) -  Part 2 of an adventure set in a British Isles inspired land. 68 pages, $6.95

The Curse of the Corpse Candle Cairn - One sheet adventure. $1


Black Books: Tomes of the Outer Dark -  This is not about the love life of Fonzie, but an OSR Cthulhu game from Simon Washbourne who has done quite a few solid OSR style games.  82 pages, $6

Mazes & Perils: Deluxe Edition - This is a Holmes based game, now in a newer version with more classes and such.  76 pages and a somewhat pricey $7.99

Posted by Jeremy at 1:51 AM No comments: