Some new systems this week. Although a couple are just B/X re-done.


Beneath the Fallen Tower -  S&W Light introductory adventurer $2.99 and 26 pages.

B/X Essentials: Cleric and Magic-User Spells -  Another case of LL apparently not being good enough, so let's reinvent the wheel to cash in. $4.99 and 34 pages.

O,S,& R: Oubliettes, Sorcery, and Reavers -  The description is somewhat patronizing and the price tag is high so I'm not touching it with the proverbial 10' pole, but apparently it's a hybrid old and modern game. $13, 134 pages

Non Human Player Codes for Swords & Wizardry Light -  Because every time a rules lighter than thou game comes out, there has to be rush of add-on products to cash in on the stuff removed from the game that people actually use.  PWYW

As part of getting old, I find a lot of modern versions of things really suck.  Rock music most notably (save for Greta Van Fleet). But also fantasy fiction, it's basically long boring epics or urban/romantic stuff.

Glen Cook and Lawrence Watt-Evans are basically the only two fantasy authors I still like who aren't dead. Sadly, both publish less and less, but the latter has just put out a new Ethshar novel, Stone Unturned, also available in hardback

Ethshar was originally based on his PBM game back in the early 1980s, but turned into a novel when a player asked him a question "What can a character do with a single spell?" which led to the novel "With a Single Spell"

Unlike a lot of other fantasy, the focus was typically on a normal person (even if they sometime happen to be wizards, they aren't major wizards but average ones), who is not really caught up in a major epic event, but something of a strange situation or problem.  In this case (have bought but not read it yet), a wizard who stumbles upon a bunch of petrified people and decided to unpetrify them.

The Ethshar novels were originally published as a paperback by a Del Rey (with covers by Darrell K. Sweet (though in once instance, the wrong cover was used), the type of quirky, personal, somewhat low key fantasy declined in popularity in favor of more epic or romantic stuff and he's had to write them basically just for fans and published by Wildside Press (which at this point seems little more than a vanity press)
Posted by Jeremy at 5:55 PM No comments:

Tim Hartin of Paratime Design is easily my favorite cartographer and has long offered enhanced version of his weekly free maps for  $1. The $1 version consisted of a pdf where you could toggle stuff on and off. While nice, they was perhaps less useful than it could be for people who want to use the maps for virtual table tops and such.

So he's going back and including zip files of the raw graphic files for all the maps. Starting with the most recent and going backwards.
Posted by Jeremy at 5:19 PM No comments:

Sort of a slow week. One interesting thing, the Talislanta books have popped up on there. Still free.
I had written a review this past week, then realized I was being a jerk in it, so tried writing it again, but it's much easier to write a review when you feel like ranting...


Quests of Doom 4: Nightstone Keep -  I think we are slowly running out of ominous names for keeps. This one is a Swords & Wizardry adventure for 4th to 6th level characters from Ed Greenwood.  24 pages, $7.99


Low Fantasy Gaming RPG -  Have no idea how compatible it is with actual OSR stuff, but here you go. Free

RPGPundit Presents #16: The Great City of Arkhome - I gott admit, I was skeptical he could keep this up for very long. But another issue of his weekly thing, this time about a city in his campaign. 18 pages, $2.99

Tales of Gothic Earth - More like tables, I think, it's the Tales of Grotesque stuff remixed. PWYW
Posted by Jeremy at 1:55 AM No comments:

Hmmm, busy week, though some of the stuff is retread just newly posted on OBS


OWB012: Secrets of Stalingrad -  I think the secret is it's now called Volgograd, which most people have never heard of. But also an adventure for Operation White Box.  $3.99, 30 pages. If wonder if he will ever do a White Star crossover, like Zone Troopers (the movie)

Spores of the Sad Shrooms -  I guess they heard Jerry Garcia was dead.  Small dungeon adventure with original artwork and new monsters. Still, kinda pricey at $6.66 and 16 pages. If it were $1.11 I'd buy it, maybe $2.22.


Hinterland: A Guide to the Wild -  A setting where people apparently ride moose.  $2.99 and 78 antler filled pages.


The Bard - Joe Bloch's take on the Bard. Presumably taken from his retro-clone.  $1

The Jester - See above. I played one from Dragon magazine once, back in the day.

The Mystic - See above. More a new age deal, if I remember correctly. Shirley McClane in D&D!

The Savant - sorta of like a magical sage. See above.

World War Weird Classes - Fantastic classes for Operation White Box. As a big fan of Weird War Tales as a kid, I remember the Creature Commandos which had a vampire, a medusa, a werewolf, a Frankenstein's monster and a bigot. There was also a separate story, GI Robot.  $1, 18 pages


BlaszczecArt Stock Art: Humans Pack 3 -  5 pictures of human (I guess) females (I guess). Kind of a bit abstract.  PWYW though, so if you need art, worth a look.

Castle Oldskull - Oldskull Dungeon Bestiary - 360 pages of random monsters, I guess. It's not clear if this is descriptions or just random tables like his previous products. Apparently system neutral so perhaps not particularly useful, since ideas for monsters are the easy part, it's the stats that are the work, even old school stats. $4.99

Paratime Design Presents...Forest Ruins -  Basically a ruined forest town or something. Looks like the maps you'd get in the old Gold Box games. $3

RPGPundit Presents #15 - Gazetteer of the Northern Middenlands - Apparently a setting  from one of his campaigns. $1.99 and 9 pages

Tales of the Grotesque and Dungeonesque   - Volumes One, Two, and Three  - These are basically collections of random stuff for a Gothic fantasy campaign. No, not wearing black and listening to Depeche Mode, the more literary kind of Gothic. PWYW
Posted by Jeremy at 11:09 PM No comments: 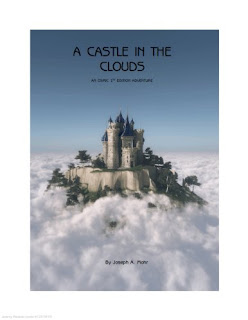 Castle in the Clouds is a 1st edition adventure from the "Old School Role Playing" company aka Joseph A. Mohr, who has produced a surprisingly large number of adventures (17 by my count) as well as a book of magic items, Malcon's Tome of Magic. I've got the latter but this is the first of his adventures I've bought. It goes for $3.50 and 25 or so pages, but it seems a bit pricey for what you get in terms of the adventure itself, it's more a mini-adventure with only about a dozen locations. The rest is mostly filler.

It's a case of where the title does describe the modules, it's set in a cloud giant's cloud castle. That has always been of of my favorite adventure ideas and it's largely been underutilized, I think. There was that goofy JG module with the balloon people, a couple decent Dungeon magazine adventures, but for something so much a part of folklore (Jack and the Beanstalk) and even music, it seems largely ignored. Compare it to Baba Yaga, who is much more obscure, yet her hut shows up all the time.

Almost over the flu. Hope I got the right year.

The Chasm of Crasmere -  One page adventure for S&W Light. PWYW.

World of Ark Starter Set -  More a set of sourcebooks for a 1e setting than adventures. $6.95


Grimoire I - Svartkonst -  "Grimoire är ett magasin för Svärd & Svartkonst och andra spel av den gamla skolan. I varje nummer finner du nytt spelmaterial och minst ett äventyr. I detta premiärnummer finner du:".  That's a Germanic language, but I dunno which. Yet the price is seemingly in US Dollar, $2.50 (when it's in a native currency, it's always something odd).

Non-Human Codex for Sword & Wizardry - I guess for people who want race as class but still want to say they are playing White Box/0e/S&W.  I don't get why you can't just play B/X, but eh. Free.

OSR Character Sheets Demonic Edition -  If you aren't playing 1e (or 1e-ish) then you really shouldn't be laying claim to the PHB cover. But it's like "White Box" that adds everything from 1e to the game (and more) yet is somehow still purer than 1e. Whatever.

Posted by Jeremy at 1:36 AM No comments:

2018 is off with a great start with me coming down with the flu. On NYE I was fine, but then after midnight I started coughing and literally could not sleep because I would cough every 2-3 minutes. Then I gave up and got up, then collapsed about 8 pm and slept for 20 hours and now feel a little better, but still awful, though the coughing has subsided.  Mostly.

I wonder why there aren't ever any positive viruses. You'd think they'd be more successful, evolution wise, since people would try to stay sick. There's helpful bacteria, after all.


The City of Greyhawk - For 2e there was this boxed set about Greyhawk. No idea how closely it resembled the actual Greyhawk or if it's good. $9.99 and


Grudge Immortal -  Japanese horror adventure for LotFP. May or may not include tentacles. $7 and 40 pages.


Stars Without Number Revised Edition -  Presumably still a mash-up of D&D and Classic Traveller. $19.99 and there is a free version as well (minus some stuff)


Dyson Logos Commercial Map Pack 1 - TBH, his dungeon drawling style is not my favorite, but $19.99 for 170 maps that can be used for commercial purposes is a steal.  Also seemingly includes cities and other stuff

NPC Creator and Emulator - Not really OSR related, but I am a sucker for these sort of things to help flesh out NPCs. $1 and 16 pages.

RPG Pundit Presents #13: Dragon Corpses - What to do with a dragon corpse. I remember once playing an Alchemist character (from Dragon, I guess) and driving everyone crazy by taking all the blood and such from monsters we'd kill.
Posted by Jeremy at 10:49 PM No comments: