Corruption being an OSR-ish game with a dark fantasy theme. Comes with a Player's Book, GM's Guide, and Monster book
Posted by Jeremy at 7:58 PM No comments:

Although I don't think it's a very good system (so much matters on your initial skill roll), I do have a lot of fond memories for Fighting Fantasy and there is currently an Advanced Fighting Fantasy Bundle of Holding

DLR2: Taladas: The Minotaurs - Sourcebook about cow people for Dragonlance. $4.99 and 64 pages

DLR3: Unsung Heroes - The dragonlance novels did have some memorable characters. These are stats for the characters you don't remember! 64 pages, $4.99

WGS1 Five Shall Be One -  It always struck me as strange that TSR pushed Greyhawk for a couple of years after kicking out EGG. But they did. This is one of those modules by the fairly competent Carl Sargent. 64 pages, $4.99

The Slump Factor - Seems to be a political satire/comedy module for Mutant Future. $10, 41 pages

The Weird that Befell Drigbolton -  Combination of an event (an object from space sfalls) and site exploration module from Gavin Norman. 60 pages, $8.99


Familiar Classes for OSR Games -  Conversion of the Pathfinder Fighter, Rogue, Ranger, Barbarian, and Zealot back into OSR terms. $1, 11 pages. I've actually got a version of the Rogue in the works since the standard thief really sucks.

PC11 - The OSR Warlock -  Didn't you already release a warlock? Yeah, that was based on GMS's version of the warlock for 3e, this is based on the 5th edition one.  12 pages, PWYW or get it from my Google Drive (if I have it working correctly)

Not the actual Pacesetter, but the new one that does old school modules. They (well, he) makes modules that tie into official ones and the latest is Ghost City of the Hidden Shrine

Though how to get to the point of being able to download it is beyond me.
Posted by Jeremy at 11:27 PM No comments:

I didn't really play Holmes much, since I started with AD&D back in '78 with an older brother of a friend who had played OD&D in college and thus didn't need the DMG, but I did have a friend my age who had Holmes and DMed a bit with somewhat hilarious results.

But a lot of people have a fond memory of it, and while there is already one Holmes based retro-clone (Mazes & Perils), there's been another in the works for the last few years, Blueholme Journeymanne, expanding on the rules of Blueholme Compleat (already released and like the original Holmes, only 1-3).

Anyway, it's soon to hit Kickstarter. The game is written, but the KS is to fund original art.

Have no idea how much they are asking for, but they've got the Fiend Folio guy and some other OSR artists, some good, some meh. The link has the full list.
Posted by Jeremy at 7:38 PM 2 comments:

Email ThisBlogThis!Share to TwitterShare to FacebookShare to Pinterest
Labels: Blueholme

I actually liked Planescape except for one thing - the stupid chimney sweep language that infected it. So I actually bought the Planescape game when it came out. Never finished it though, because I hate real time clicky combat that it and other Infinity games feature (I own all of them yet have not gotten more than an hour or so into them because of that. So why keep buying them? I don't know).

Anyway, enhanced versions of Baldur's Gate 1&2 have been released, now it looks like Planescape is the next one.

Presumably it will continue to use the 2e rules, though maybe with some additions.
Posted by Jeremy at 1:58 AM No comments:

Fairly slow week with only a handful of new items.


FROA1 Ninja Wars -  Nin nin nin. Ninjas kinda sucked in OA, but they are still cool thematically. This is an adventure about them. 96 pages, $4.99

Player's Secret of Stjordvik -  One of the many player books for Birthright, I think its equivalent of Norway. $4.99 and 32 pages.


Unicorn with a horn -  I think that is known a a horse. But it's also an adventure from the Gagmen. Mostly statless but seemingly for B/X D&D . 11 pages, PWYW.

System V: An Advanced Optional Ability Score System -  For the 2e retroclone For Gold & Glory. Doesn't quite seem like a topic worth  $1.75, but eh. 12 pages,

The Witch for Hero's Journey -  I think the guy releases the same witch book for every single OSR game, in this case the game from Small Niche. 68 pages, $2.99


Friday Freebie Enhanced Map 3-17-17 - Looks like a standard but well designed dungeon level.
Posted by Jeremy at 8:35 PM No comments:


Cormyr -  Sourcebook for the FR's main country. I always found it a bit offputting, it's basically a heavy controlled dictatorship, which seems like it leaves little room for adventuring. 64 pages, $4.99

WGA1 Flames of the Falcon's Revenge -   2e Greyhawk adventure module,  At this point, I don't think Greyhawk has anything to do with Gygax's Greyhawk. 64 pages $4.99

Villains Lorebook -  Stats and writeups of the various villains from the various Forgotten Realms novels.

The Ballad of Sally Anne - Seems like a haunted house adventure.  9 pages, PWYW

PC 10 The OSR Beguiler -  Started this last year, finally felt good enough to finish it. Basically it's a sleazy version of the assassin inspired by the random tables in one of Kabuki Kaiser's solo dungeon delves, where you can recruit prostitutes for your adventuring party. But they didn't have a class, so I cam up with this. 10 pages,  PWYW or get it from my Google Drive if I did it correctly.

(Why is it PC10 even though the previous one was PC8? Because I have close to 15 new classes in progress and in various states of playtesting and I lost track of which ones I had released)

Warriors of the Red Planet Bundle - Print and PDF copies of the excellent Barsoomish RPG and it's so so adventure.  $22.28


Friday Freebie 3-10-17 - This week's map from Paratime Design is pretty jam packed. $1 for the enhanced version, has link to free on that page.
Posted by Jeremy at 9:04 PM No comments:

The Merciless Merchants bring out some 2E compatible modules 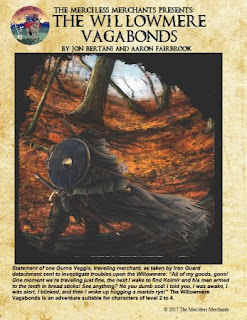 I missed this in my last update or two, but a couple of new guys, The Merciless Merchants (which makes me picture them as Ferrengi),  have released a couple of modules over at DTRPG for the 2e Retroclone For Gold & Glory.

Although I was a fan of Spelljammer and Birthright, the 2e rules always just felt "wrong" to me, though in retrospect, not nearly as wrong as later editions. It certainly does clean up a lot of the issues with 1e, though not all. So it has its points.

Anyway, the first module, shown above, is The Willowmere Vagabonds for levels 2-4, which sounds like the PCs must deal with bandits in a forest (hopefully more than that).

Their second is The Nevermore Mines, which seems to be horror themed and is for levels 4-7.

Both are a bit pricey at $8.40 a pop, but also are about 60 pages each and from looking at the previews, seem to have a good chunk of stock art, which adds up 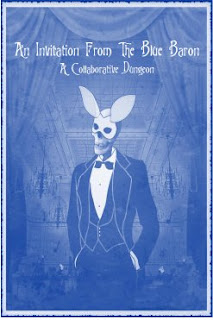 Yes, I possibly should name this blog "A Day or Two Late OSR News and Rarely Reviews", but in case you missed it, a collaborative dungeon for BlueHolme, the Holmes Basic retro-clone is now available for free

I really liked both version of the Numromen dungeon (the first one for Blue Holme), this seems a bit overly slick and too modern. But it's free

From flu season to tornado season, I just had a near miss, with something ripping the roof of some old sheds where I live and more impressively, picking up a 1,100 lb round bale of hay and moving it 20 feet away.

Somewhat busy release week, though some are re-treads.

Van Richten's Monster Hunter's Compendium Vol 1 -  Compilation of someof the Van Richten monster splatbooks released for Ravenloft. Vampires, werecritters, and golems. They weren't bad, I got a bunch from the old $5 grab bag from American Science & Surplus (along with like 20 copies of Buck Rogers War Against the Han). 288 pages, $9.99

Wrath of the Mintotaur - Theseus!!!! Or perhaps actually a "fast play" adventure for D&D meant to introduce people to the game.  48 pages, $4.99 (and print versions available)


Guide to the Duchy of Valnwell Special Edition -  New version of the "open" city from Small Niche Games. What makes this so special? 10 mini adventures added to it.  $6.99 and 210 pages

The Mazes & Perils Holiday Special 2016 -  Short adventure for the Holmes clone of the same name, as well as new monsters and a village setting. 24 pages, $2.79


The Adventurer's Guide to Lost Arcana -  Spell Sourcebook for 2e/For Gold & Glory from Moses Wildermuth, who is a pretty nice guy. 68 pages and $3.50

The Kingdom of Richard - Wile it describes said kingdom (from the author's youth, thus the name, I imagine), also has some new classes. 36 pages and $2.42 (which I guess might be with 30% off)

Friday Freebie Enhanced Map 3-3-17 - Looks like a temple or tomb built into a side of a cliff. $1 for the enhanced version.
Posted by Jeremy at 11:33 PM No comments:

Which basically just means 30% off. Still, a number of OSR publishers are participating. In no particular order:

North Wind Adventures, makers of AS&SH. Usually the game itself is cheap, but the adventure are pricey at $10. Now only $7, still too rich for my blood given the previous mixed bag quality, but better. Also not crazy about their shift in art style to comic books. I don't really like comic book art, to be honest. Though it's the older style, not the terrible digital pain style of modern comics which makes them look like South Park.

Three Sages Games made one of my favorite OSR modules, The Beast that Waits. Their other stuff is much smaller, probably because TBTW didn't sell well.

Expeditious Retreat Press, the chaps behind Advanced Adventures which more than anything is what got me into old AD&D. I got their trio of compilations from Lulu. Looks like the 4th one will be a while as they are going out maybe 1-2 a year, but I imagine buying the PDFs would help justify releasing more.  (The catch is, the PDFs are hard to read, even with reading glasses, since they are meant for print)

Quasar Knight hasn't produced much OSR stuff, save for a Harry Potter style sourcebook for S&W

Infinibader produced a couple of okay but nicely detailed modules.

Mazes & Perils never really clicked with me, but I was never a huge Holmes fan, since I started with AD&D itself.

Goodman Games. I really did not like the direction Dungeon Crawl Classics went, from the stupid dice to renaming ability scores to spellcasting to the character funnel, But they produced a handful of 1e adventures.

D101 Games produces Crypts & Things which is nice, though I wasn't impressed by the adventures for it.

Judges Guild has its back catalog available, much of which is terrible, but there are some gems, mostly the Jaquays stuff.  The Book of Treasure Maps is an underrated gem.

Posted by Jeremy at 9:45 PM No comments: