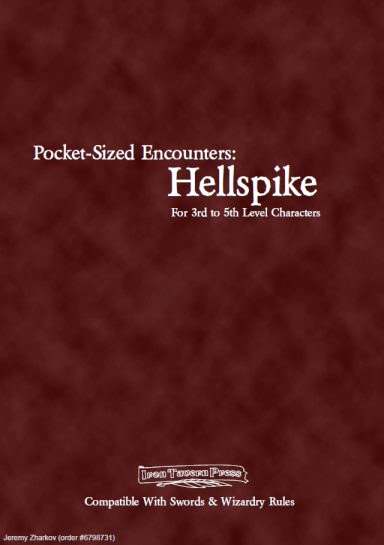 PSE6: Hellspike is the sixth product in the Pocket Sized Encounters line, a series of small modules for Swords & Wizardry (and in one case, Labyrinth Lord) from Iron Tavern Press. When I looked at the description and saw it had 19 pages, I thought "19 pages is a lot more than pocket sized." Well I was being optimistic, the adventure locale itself is only 6 rooms. So it is as pocket sized as advertised.

The background is quite lengthy, but basically boils down to a wizard thinking he would be clever by making a tower go underground (using reverse gravity), not upward into the sky. Then of course he had an accident which left his tower abandoned, and its magic decaying, including the reverse gravity spell fading and gravity going back to normal. Generally PCs don't need any reason to loot a dead wizard's tower, but there are three fairly lengthy plot hooks given if you need a better reason.

But the PCs weren't the first to discover the tower. The first room is an encounter with a group of bird people called the craw. Maybe this is a Swords & Wizardry monster, it was new to me anyway. They are apparently bandits and conmen, not particularly evil, but still probably end up fighting with the party.

After that comes a library, which has descriptions for 3 notable books, and then you come across the body of the dead wizard, along with the escaped laboratory animals that ate his body. This is actually a fairly bight fight, because there are a lot of these animals (8), and they have 3 attacks each. They have only 1 HD, so probably won't hit, but that's 24 attacks, a lot of rolling.

The rest of the tower is unfinished. At least by the wizard, but also perhaps by the author. The next two rooms are empty, save that the PCs stand a chance of being hit by an avalanche, as well as having one of their ability scores dropped by one. If they finally decide to press on, they find a fettered demon in the last and final room. They can either free it, in which it does nothing, leave it, or fight it, at which point it frees itself after a few rounds and tries to kill the PCs. There's also not much in the way of loot in the tower, save a handful of magic pills that are similar to potions.

The pdf uses single column, A5 format, so it's easy to read on a tablet, though not much per page. There's also quite a bit of padding. Two covers, a blurb page, a title page, and a page explaining the product line. There's a lot of art, most of it stock art from William McAusland (and so high quality) but a couple of seemingly original and well drawn pieces and a nice hand drawn map.

Hellspike starts off good, but after the first three rooms it basically just stops and has a seemingly half-hearted finish. While it has a lot of background material and nice art, it's hard to justify a $2.00 (now $2.50) price tag for what is basically 2 combat encounters, a description of a small library, and one new monster that the PCs probably don't fight.