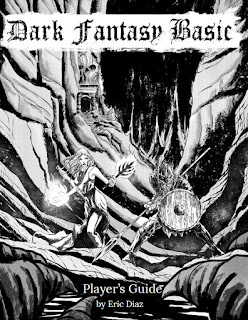 One of the things I dislike about the OSR movement is the repetition of OD&D and B/X clones, simply republished with minimal house rules (sometimes not even that). Another thing I dislike is the tendency toward simpler characters with no special powers in the assertion that is more "old school" and how the game should be played. Yet the rapid proliferation of character classes in both official magazines and fanzines in the early days argues to the contrary.

Dark Fantasy Basic from Eric Diaz isn't just a rehash of OD&D or B/X, but takes an old school framework and uses concepts from more modern incarnations of the game, particularly 5th edition, but beyond that, new ideas. The basics are the same, character classes, traditional abilities scores (using the B/X scale for bonuses) but most of the details are quite different, and it allows a good deal of character customization without the bloat or paperwork of 3e. 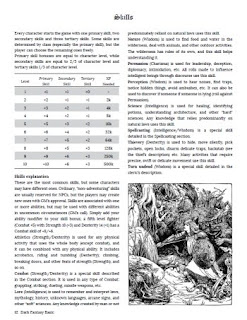 Firstly, character generation uses a curious method where you only roll 3d6 three times, called the yin-yang method. Each ability score is coupled with another (Strength and Intelligence, Wisdom and Dexterity, Constitution and Charisma). The roll is the ability score for the first one, but the second is that score subtracted from 21. So if a character has an 18 strength, he has a 3 intelligence. And so on.

Secondly, although it features the four standard classes (fighter, cleric, magic-user, thief, plus a special one) class abilities are largely built around a single skill system, with a d20 rolled and the skill added to the related ability bonus and compared to a target number based on difficulty (15 being "average" difficulty). The skill level is tied to the class level, with there being primary, secondary, and tertiary skills. Primary skills are at the same level as the class level (so 5th level is +5), while secondary is two-thirds, and tertiary at one third.  Each character has 1 primary skill, two secondary, and three tertiary. Some are mandatory for a class (combat is always) but many are up to the player to pick.

This skill system encompasses pretty much everything, from combat to spellcasting and of course, thief skills. There are about 10 skills in all. It uses the advantage/disadvantage system from 5e (rolling 2 d20s), and for that matter, saving throws also use the 5e method of ability checks (with a bonus of +1 per level). 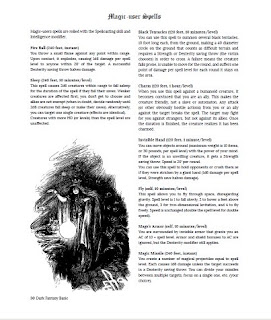 Additionally, classes have feats to customize their character. These are not the minor ticky-tac things as found in 3rd edition, but essentially character class powers. For instance, fighters can take abilities that are normally associated with a paladin or ranger. There's also a small list of general feats any class can take, though they can also take feats from other classes with GM approval.

Hit points are fixed at 4 per level, plus constitution bonus. There is a feat to improve this by one per level (which the fighter gets). Armor class starts at 10 and goes up. Armor and weapons are handled generically. Light, medium and heavy for armor (improving AC by 2,4, and 6 respectively). Shields also come in sizes, but larger ones improve the armor class by 2. Weapons range from tiny (d4) through small (d6), medium (d8), large (d10), and great (d12), though specific types (sword, spear, axe, etc) get special abilities.

Magic is also tied into the skill and feat system. Each spell is a feat, which means characters don't have many. But it can be cast over and over without limit and encompasses more than a single spell as in classic D&D. Instead, it can be several different ones, depending on the power level being used. For instance, "Healing" is a spell, but it's not just healing wounds, if cast at a higher level it might instead cure disease instead of just hit points.

But casting at a higher level is not restricted by level, but simply a function of making a successful spellcasting skill roll. So a low level character could try to cast a higher level aspect of his spell, he'd just have a difficult time in succeeding (the difficulty is 10 plus twice the spell level). So an average ability 3rd level caster could theoretically cast a 6th level spell, but it would be tricky. And there is a price for failure, damage in hit points equal to the spell level being attempted. And if the roll is really blown (with a 1), the spell is lost until memorized (or prayed for) again. 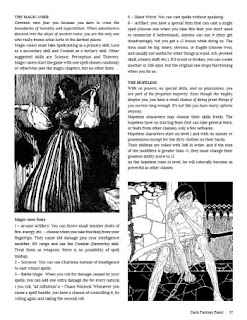 As it's essentially just a player's book, there's no monsters or magic items or such. The rest of the book does have rules for advancement, encumbrance, languages, and the usual stuff. Advancement is pretty standard, except characters may or may not get a feat when they gain a level, it depends on if a character's abilities bonuses and current number of feats add up to the new level or not. If not, they gain a feat. They probably won't, since at start, all characters have a net ability bonus of 0 due to the yin-yang method.

The PDF is nicely laid out with a lot of illustrations. All old public domain (except the nice cover), but they do not clash with each other, as sometimes is the case, they all look quite nice. On the other hand, at least my copy (which the author actually sent me, not from DTRPG) did not have bookmarks, which made it hard to find what you are looking for, and character creation required a lot of flipping back and forth (to the skills section and the spells section). It would have been nice to have helpful tables at the end of the book.

While the author apparently intended it to be as concise as possible (or so says the introduction), examples would have been really helpful: a character creation example, a spellcasting example, examples of skill uses, etc. In the electronic era, there is no real reason to be concise at the expense of being clear. 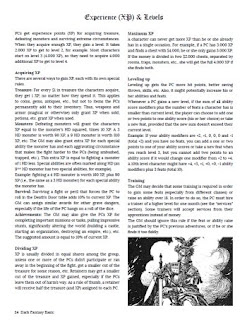 When it seems like every week has a new Swords & Wizardry hack with a smattering of house rules, it's nice to see something completely different, something more radical, but still clearly old school. Dark Fantasy Basic works really well for the most part and is cleverly designed. It's not without its flaws, though they are pretty minor and perhaps somewhat caused by my misreading of the rules.

For instance, some of the classes seem a bit less than optimal. The cleric is probably overpowered in OD&D and definitely AD&D, but here it's not terribly useful with its primary skill (turning undead) only being useful if you have a lot of undead. A third level cleric with one spell can basically only do that one spell (probably healing). Oh sure, it's neat that a low-ish level cleric can heal and cure disease and poison and maybe even petrification, but it's one dimensional.

Similarly one-dimensional, the thief can either be good at thievery or finding traps (perception) since the two abilities those skills uses are tied to each other yin-yang style.

I would probably fix this by letting characters pick feats for 2nd and 3rd levels. Then again, maybe that's supposed to be how it works. 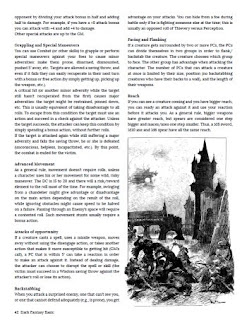 Thirdly, the combat attack progressions mostly follows AD&D, but the hit points (and armor class) for characters follow D&D. This might seem somewhat minor, but basically it has the effect of D&D monsters being too easy (as DFB will hit them easier than same level D&D characters) and AD&D monsters being too tough (as they hit too hard for DFB characters to survive). This is especially exacerbated when you hae DFB characters fighting each other. They have very good "to hits", somewhat poor armor classes, low hit points, and possibly high weapon damages (if they use two-handed weapons)

I would just increase the hit points per level from 4 to 5 (or maybe even 6) to bring them more in line with AD&D.

And finally there's also the danger of the system being too streamlined. You basically just roll the same thing over and over, which gets monotonous. Especially for thieves. Thievery encompasses basically everything but climbing walls and finding traps. Maybe there doesn't need to be an separate skill for every aspect of thievery, but one skill is probably too broad.

As I re-read this, it seems like my complaints are longer than the praise, but that's just stuff that came up while playing in a one-shot. But it's a game you'd actually want to play (or run) and that's really the best praise a game can get.