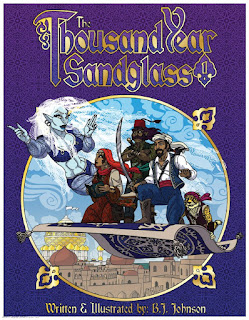 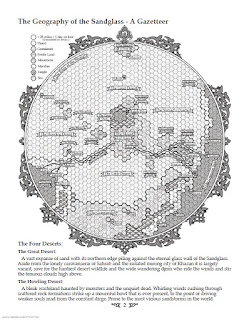 The world is a circle 50 hexes across, with each hex being 25 miles, so essentially a 1250 mile diameter. In the center is a large mount where sand (and other material) falls from the sky from the upper half of the sandglass. The world is dominated by four different deserts, each in one direction, but there are bands of grasslands and two seas, one small, one still pretty small but bigger.

Politically, there are essentially 3 nations and two groups of free cities. One nation is "evil", controlled by a sinister group of wizards. The largest is more typical of what you'd expect from an Arabian Nights setting (including a Baghdad clone, Kalabad), and the middle is magical and possibly Indian inspired as it seems to be ruled by a Rajah (though it's called an emirate).

As mentioned, it's meant for use with the Labyrinth Lord rules and works with either regular or advanced. Probably the only real difference is how the new races work. If you use regular LL, with Basic/Expert style race as class, you have three new class races — the Jann which is basically an elf (tougher but with a reduced spell list); the Kedai which is a cat person and more like a halfing (essentially a wimpier fighter); and the Largoman which is a short lizardperson and more or less like a Dwarf. 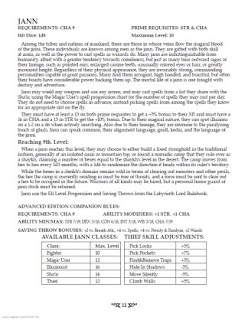 On the other hand, if you use Advanced  LL they work like normal races, able to take various classes but having level limits. In that case, the Jann's best class is actually Illusionist, the Kedai cat person can be an assassin or monk, and the lizardman Largoman can be a ranger or druid. It doesn't cover allowed multi-classes and the level limits seem a bit off, as all are very limited in the thief class, which traditionally is unlimited for all non-humans.

In either event, there's another class, the Sha'ir. This is from the 2e Al-Qadim setting, though here it is much simplified, essentially being a magic-user with a very limited spell list, but not having to memorize spells ahead of time, just having so many spells per day. They also get a minor genie as pet.

One additional tweak to the rules to fit the setting is that dexterity provides twice the normal armor class bonus. This is to offset for the lack of heavy armor generally found in desert settings. 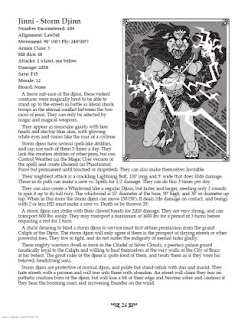 There are a handful of new monsters. Some are possibly new to Labyrinth Lord but familiar for AD&D players, stats for the various genies — Djinn, Efreet, Marid, and Dao. Added though is a newer, higher powered Storm Djinn, a special variant meant to battle Efreet (as the regular Djinn is much weaker). There's a new type of undead that is basically a skeleton (in form, but much tougher) but has an animal skull and special powers depending on the skull. There's also the very interesting Tomb Rat, which are humanoid rat like beings that love to eat undead (and corpses in general).

Although several cities are mentioned, one city, Kalabad, the biggest city in the setting is given some added description and a number of random encounter tables. They are somewhat basic compared to the old Judges Guild tables, much less more modern OSR product like Mad Monks of Kwontoom, but it gives the GM some help with coming up adventures. 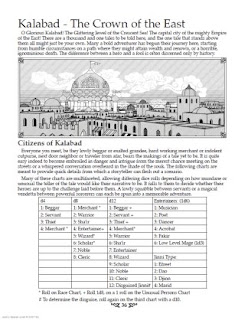 Speaking of which, the last half or so of the book contains a surprisingly large number of adventures, almost all dungeon based. These range from only a a half-dozen rooms to over 20.

The first adventure is a city adventure (though still basically a dungeon) showing how the random city encounter tables can be fleshed out. It essentially involves an assault on a robber stronghold.

The second is a small shrine of a crocodile god, it's only three rooms, as is the third, a lair of a sect of assassins. The fourth is a bit larger and involves an Egyptian style tomb turned into a lair by a magic-user.

The fifth adventure (The Ruined Shrine of the Serpent Cult) is much longer, as long as most mini-modules you see, compring about 20 areas. The sixth adventure is only half as long as the previous, 11 areas. It seems a bit out of place at first glance, the ruins of an arena, but then again, the Romans did rule Egypt for a while, so I suppose there is some overlap (much like with the mummies and such).

The seventh adventure is a ruined temple full of statues and is a little longer than the sixth. The eighth and final adventure is the Cave of Wonders, a place the PCs can go to win wishes from a genie. It's as long as the fifth adventure.

Strictly speaking, I could and possibly should write a separate review for each adventure, as that's really the only way to do them justice. But at the same time, there is a certain sameness to them, focusing mostly on exploration and combat than anything else. If your players prefer that sort of thing (and mine do), then they should be happy. 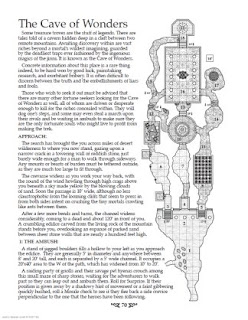 It's a very nice looking PDF, though it of course defaults to the annoying "Single Page Continuous" and "Fit Width" which makes it annoying on the PC, at least annoying enough for me to constantly mention it in PDFs. It's illustrated by the author and he's fairly talented, on part with at least the mid level professional RPG artists (the sort you pay $2-3 per piece of stock art, anyway).

Book I of The Thousand Year Sandglass might not be groundbreaking (since in a lot of ways it's a light version of Al-Qadim), but it's something I wish the OSR had more of, a different flavor of fantasy, as opposed to another grimdark set of S&W houserules.  Even without the remarkable number of included adventures it would be worth a buy, but conversely, even if you aren't interested in the setting it's worth a buy because of all the adventures.