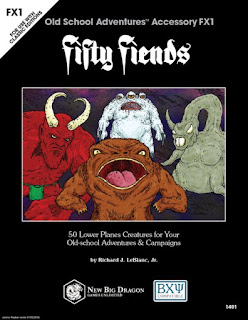 Fifty Fiends from New Big Dragon Games (Richard J. LeBlanc, Jr.) is a curious book. Firstly, because like almost all his other work, it's a ridiculously low price ($1) given the amount of content (70 pages). That includes original illustrations, albeit by the author, but he's as good as some "professional" artists who sell stock art. The other curious thing is that despite it being a book of demons and devils and chaotic neutral outsiders, it's for Basic and Expert D&D (B/X). Which didn't have demons, devils, or really outsiders at all. You had something like them introduced in the Immortals set, but they were meant to be a challenge for Immortals, not normal characters.

To me this is one of the odder, even maddening trends of the OSR — re-creating everything from 1E instead of just, you know, playing 1E. This is especially puzzling to me in the case of B/X and BECMI. Although I was (and am) mostly a 1E fan, I did enjoy BECMI because of its differences from 1E. The different classes, different spells, different monsters, different cosmology, and the consequences of its rules on the world it developed. Adding everything from 1e to B/X & BECMI makes BX/BECMI worse, not better, because they deserve to be their own thing, not a copy of 1E. But it's like 1E has cooties or something, in the eyes of the OSR. 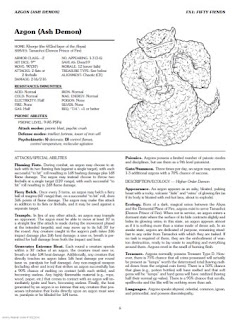 Furthermore in this case, it essentially builds off the hierarchy of devils and demons in the 1E MM, but ignores the further development in the FF and MM2. For instance, you have an entry in this for Mammon, the arch-devil (quite unlike his MM2 write-up) and instead of neutral evil outsiders being "daemons" (which apparently actually dates back to the D series of modules, predating AD&D), they are "yamadutaas". Presumably all this makes sense to the author, who apparently eventually plans to re-introduce the 1E MM stuff in a later product.

Still, regardless, you get a lot of monsters useable in most OSR games. Each one gets a full page writeup broken up into separate headings for attacks, appearance, ecology, etc. Ironically, mimicking the Monstrous books of 2E, but actually somewhat more useful, because it lists what the various damage types the creature is immune or partially immune to, rather than having the immunities listed simply in the demon or devil entry (where it's easy to forget about) as well in many cases, having custom reaction tables. On the other hand there is no entry for intelligence or magic resistance. While truthfully intelligence doesn't show up very often, magic resistance is a key aspect to their toughness (as well as keeping magic-users from dominating at higher levels). These monsters range from Arch-Devils and Demon Princes/Lords and "higher order", to relatively weak "lower order" ones with "standard order" in between. To my glance, only the two Arch-Devils (Aamon and Mammon) are drawn from actual folklore, the rest seemingly are original.

There really aren't a lot of standouts, though. There's a lot of stuff you could use, but not a lot that makes you think "Hey, that's neat" or "that's weird." Perhaps the most noteworthy is the "Squarter", which is pretty much what it sounds, a demon that sprays his waste like a hippo. There's also the Grock, which is like a cross between Demogorgon and a Vrock, basically a two headed latter with tentacles for arms.

The most intirguing idea is that of the Nitabotht, essentially a doppleganger that lives in the Abyss and impersonates demons. I also like the Azgon or Ash Demon, basically a fire based demon that can throw fireballs or spit magma and sort of looks like Wild Bunch era Ernest Borgnine, if he were made out of lava. I also like the Wrohmog, which is a creepy looking humanoid thing eith an eel head, eel heads for hands, and eal head for a tail. 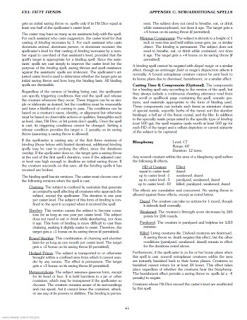 Lastly the book ends with several appendices, including mini-primer on planar cosmology. This is more or less the 3rd edition of things, as is the additional section on languages (Celestial, Auran, Abyssal, etc) and alignment. There's also a number of new spells converted from 3e, however not all of them have had their levels changed (in 3e, cleric spells go to 9th level like MUs) and some seem to be for Bards and Illusionists which I don't think B/X has (though 3e doesn't have Illusionists). And lastly a pronunciation guide for the critters.

Like all his other products, it has a clean, functional design. The art, while not rivaling top professionals, is better than many artists I could name. So overall it's a nice looking PDF. Though I do wish the font size were a little bigger and of course, that it didn't default to single page continuous and fit width (not important on a tablet, but on a PC it's annoying)

At a $1, it's something you can't really go wrong buying, but I really think that B/X is a poor fit for it. As I said, B/X should be its own thing, not an AD&D imitator. But that makes it all the more useful for 1e (and presumably OD&D, if you ignore the devils), though you might have to beef up some of the demons and make up magic resistance ratings.
Posted by Jeremy at 1:35 AM