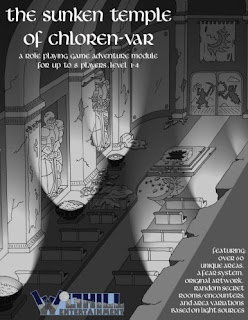 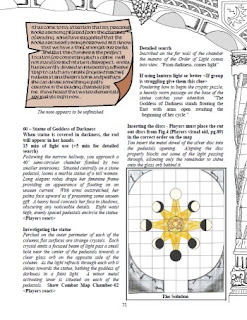 Basically the premise is that the PC's are stopping at an inn for the night, but there's no room available. However, shortly later there is room vacany, because one of the guests is murdered. The PCs also get access to the victim's backpack, which contains an journal and map to the dungeon. The journal explains that the victims ancestor long, long ago, was a squire and failed (maybe) his liege by not helping him enough in the dungeon. And that ancestor wants one of his descendants to oneday redeem the family honor. Since he's now dead, apparently the players will want to take on that task for themselves.

The dungeon itself is well detailed, but there's really not a lot of variety. While it's called a "sunken temple", really it's a crypt, so almost all the encounters are with skeletons, or skeleton like creatures. There are a couple of puzzles. But in either case, there's really not a lot of motivation for the players, as there is almost no treasure, either actual wealth or cool magic items to find. Much of the exploration is just to push forward the plot of redeeming the dead dude's ancestor. 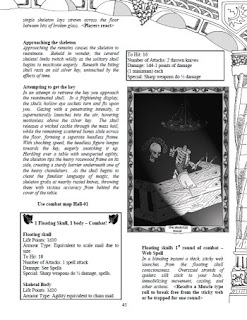 As such, there's a lot of "boxed" text in this, that is, text meant to be read to players. Usually broken up with the phrase <players react> to know when to let players actually, well, play.  While I do not generally use boxed text, I do not really mind it, as long as it's short (2-3 sentences). It's really overkill here, as I would say most of the product is boxed text. Even that could be overlooked if it were a compelling story (like say that of the original Ravenloft), but here it's hard to care about the guy's ancestor, since he seems kinda whiny.

The other thing that really sets it apart from other modules, and is advertised a feature, is it's handling of light. Most rooms have added descriptions when players use a better light source. Beyond that, it constantly features "treasure" that consists of light sources (torches and oil). To make this easier to handle, it includes several tracking tables to make keeping track of how long the light lasts easier. 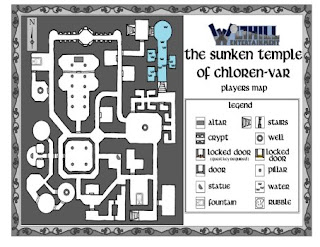 The PDF is laid out fairly fancily, with a lot of decent quality original artwork. The map is well designed, but doesn't have squares, so a bit hard to tell the scale of things.  There are separate combat maps (as Pay What You Want) that might help in this regard

A lot of work went into The Sunken Temple of Chloren-Var, but I think it's held back by it's somewhat strange design. Are there people who find tracking light meticulously to be enjoyable? I'm sure there are, but it's something that gets handwaved in most games. And while I think read aloud text can be helpful, I think there's just too much here to be easily read to players, or to be listened to by them. I really can't help but think that this should have been an old style computer text adventure, like Zork.