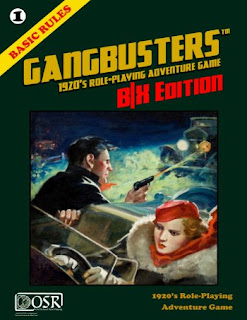 Gangbusters has had something of a comeback, thanks to a longtime fan, Mark A. Hunt, and the blessings of the original creator. Gangbusters B/X Edition is one of those new products, meant to merge Gangbusters to the Basic and Expert D&D rules of Moldvay and Cook. Despite the name though, most of the chasis is not from B/X, but from White Box, by way of the Lovecraft mythos game, Eldritch Tales

At its core, it follows the basic D&D model of rolling up stats and then picking a class.  The classes are somewhat abstract, "Brutish", "Educated", "Connected", and "Street Smart", each associated with an ability score. It's somewhat reminiscent of what d20 Modern did, but here Wisdom and Constitution are left out. 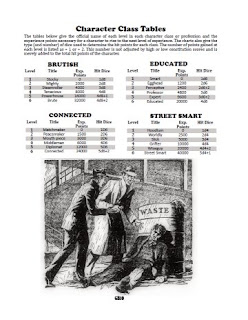 Brutish is basically a fighter. Street Smart is close to being a thief, but instead of having d100% based skills that improve with their level, a d6 is used, and they fail on a 1 or 2. I am really not a fan of this sort of skill system which many OSR people seem to think is somehow more purer, since it was first found in White Box D&D (where it was used to find secret doors and dwarf stuff).  Educated characters really have no D&D analog, but can choose one skill that they can perform like the "Street Smart" (that is, fail on a 1-2 on a d6) ranging from Accounting to Safecracking.  I'm not sure you'd get much business if you were an accountant that failed 33% of the time. "Connected" is based on charisma and basically they get an improved reaction with one type of person (like businessmen or police) as well as the occasional favor.

Levels only go to 6th (there might well be an Expert rulebook that expands this) but rather than using the B/X rules of having one hit dice per level, some levels have a modifier. The hit die type varies from character class, but all have this. For instance, at 3rd level, the Educated has 2d6+2 hit points, then 3d6 at 4th level, then 4d6+2 at 5th. The Brutish has 4d8+2 at 6th level, the Connected 5d6+2, the Educated 4d6, and the poor Street Smart at only 5d4+1. Worse, the Street Smart has the slowest XP progression.

All classes have the same combat progression, basically that of the fighter, going up 2 every 3 levels. Curiously, armor class in the game is largely determined by how expensive a character's clothing is. Poor clothing is AC 7, average clothing is AC 5, and luxury clothing is AC 3. While at first glance this is bizarre, silly even, it does make some sense in that gangsters, at least in movies, often wore really fancy suits and this could justify it.

The rest of the book is largely for the GM, ideas and tools to use for building adventures. It's not particularly in depth, especially as I re-read the original Gangbusters game.

The PDF is double column, but has a fairly large text size. There's a bit of period art. All in all looks nice.

Gangbusters B/X Edition is not all that B/X, but aside from that, seems to be a fairly solid game with some odd choices. I just wish it were more like the original Gangbusters, which had a surprising amount of depth in a 64 page book,  and not a rules light White Box based game. Even if you want the latter, you'd be better off just taking Eldritch Tales and dropping the Lovecraft stuff.