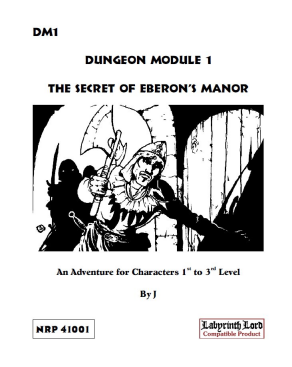 DM1 The Secret of Eberon's Manor is an adventure module for Labyrinth Lord from New Realms Publishing. It's a small beginner level adventure written and apparently illustrated by the same person, mysteriously named "J". It's essentially a site based adventure — no plot, just a place for the PCs to explore, in this case the ruins of a wizard's home, or rather, the dungeon below his home.

The general format is (not surprisingly) similar to the old TSR modules, specifically B1 In Search of the Unknown. It starts with a background, then GM's background, then moves onto a table of rumors. The adventure itself consists of two parts, the ruins of the manor itself (rather sparse) and the dungeon below the manor. Each starts off with a wandering monster table, then is followed by several keyed locations. Each location generally features boxed text to read, then has details of the area for the GM.

The upper ruins have only five keyed locations, all quite ordinary. The dungeon below features a bit less than twenty. Most of these are detailed, but a few are quite short. Most are relatively mundane — a storeroom, an armory, a library, a study, etc. They are quite elaborately detailed, though.

The maps are computer generated, but look like they came from a program from the early '90s. Reasonably high resolution, but an limited color palette. The art is pretty good, black and white, although often quite pixelated.

I basically paid $1 for it in a bundle, and for that price, it's not bad, but I don't think it's worth the list price of $3. If you are one of those that loves sparsely detailed but original or wacky dungeons, this isn't for you. Most of it's something the average person could come up with, and as such, it's a decent  adventure for beginner GMs, but experienced ones would not be overly impressed. Unless you are sick of B1, that's the better choice.

It's also unclear just what the "secret" of the manor was.