Dwimmermount Review — A Mountain of an Adventure 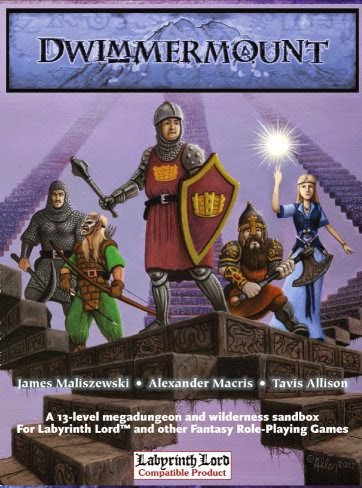 The story behind Dwimmermount could probably span a short novel (or at least a long essay), so I won't go into that. Suffice it to say, it's a megadungeon for Labyrinth Lord by James Maliszewski and polished up by Alexander Macris and Tavis Allison of Autarch, who published it. It's a megadungeon in just about every sense of the word. But what is a megadungeon, you ask?

Well, a megadungeon is essentially a really, really large dungeon. At least eight levels, and hundreds of rooms, I'd say. But where Dwimmermount answers the megadungeon call is not just in those areas (13 levels and 750 plus rooms), but in the level of detail. Many megadungeons are content to have a line or so of description for each room, or perhaps even leave dozens of rooms blank, even whole levels. But Dwimmermount doesn't cheap out, each room is described in at least a paragraph. Oh sure, a few rooms are empty, which only takes a sentence or two, but even those get a description beyond "Empty room".

So unlike a lot of others, Dwimmermount is ready to play right out of the book. This even extends to the surrounding area, including a well described home base, a frontier town called Muntberg.

Dwimmermount is for Labyrinth Lord, but it's almost a very specific sort of those rules, one housed ruled by the original designer. Elves are Martians, Dwarves are created servants who turn to stone when they die. All in all, it's not too gonzo, but not vanilla D&D, either. It's not too hard to adapt, though, those sort of Elves and Dwarves don't need to be the same as the ones in the outside world, after all.

The first level is the Path of Mavors. When I first saw this, I thought it was the Path of Mayors. But Mavors is a god. At any rate, it's more a regular sort of dungeon. Rats, kobolds, orcs, oozes and spiders and the like. Nothing too outlandish, except one monster that is a nod to Clark Ashton Smith.

The second level is broken up into two sublevels, the laboratory and the reliquary. It has much of the same, more traditional monsters like gnolls, hobgoblins, wights, and oozes, but also has more strange elements, such as ancient machinery and statis chambers.

With the first part of the third level, The House of Portals, Dwimmermount takes a turn towards science fiction, or at least planetary romance/sword & planet (like Barsoom and the like). As the name of the level implies, there are gateways to other planets - Areon, which is Mars like; Kythirea which is like Venus; and Ioun, which is like the Moon. Again, these are not real life versions of those planets, but the sort you would find in works by Edgar Rice Burroughs or Otis Kline. The second part of the third level, The Reservoir is closer to sci-fi, with lots of strange machinery for the party to puzzle over.

Dwimmermount veers back to fantasy with the fourth level, The Lesser Hall of Secrets. Here are traditional mid level monsters like the minotaur and gargoyles, but also the ranine, who are frog like servants of Tsath-Dagon, basically another name for Tsathoggua of Cthulhu mythos fame. The fifth level, The Greater Hall of Secrets continues the same basic theme, but is tougher.

The sixth level is another split level, containing The Ossuaries and the Manufactory. The former is something of a graveyard, and is full of undead, while the latter is back to the science fantasy feel.

Next up is The Deep Hollows, a series of caverns. These contain what you'd expect to find in caverns - trolls troglodytes and so forth, as well as some nasty surprises.

The eighth level, The Prison, is where it starts becoming really high level. Balors, Mariliths, other high level demons, as well as possibly an encounter with a certain faceless demon lord, in a great homage to Prince of Darkness.

The City of Ancients rounds out Dwimmermount proper. Though in many ways, it's not really part of Dwimmermount, but a separate thing that just happens to be under Dwimmermount. It is probably the most sketchily described, only 13 areas and with a random ruin table.

And finally, there is a zero-th level, the Divinarium. This is actually accessed from the forth or sixth levels, and is really more a mini-level. Despite the name, it's more of a science fiction level and probably could have been called The Hangar.

The description of Dwimmermount takes up about 250 pages out of the 400 page book. What is in the rest? Well, much of it is a bit redundant if you are playing anything other than regular Labyrinth Lord. You have some new classes, like the Paladin, spells and magic items, and then a bunch of new monsters. Most of this can be found in the Advanced Edition Companion for Labyrinth Lord. There are only a handful of truly new monsters and items.

There's also some support material - rival adventuring parties and description of the other worlds. And there's a fairly complex story to Dwimmermount, though the PCs might never realize it.

As I don't have my hardback yet, I can only judge by the final PDF. That looks nice, but there is a lot of white space on the edges. I normally like this in my modules so I can write notes, but I'm not sure I want to do that in my hardback. The art is something of a mixed bag. Much of it is old school in style, including a piece by Erol Otus (and supposedly one by Jeff Dee), but some of the newer stuff is a bit cartoonish. The maps are by Tim Hartin and are really nice. While there are separate map and illustration books (and PDFs), you don't need them, the maps and art are also in the main book (or PDF).

It can be hard to separate Dwimmermount the product from Dwimmermount the Kickstarter drama, some people don't even seem willing to try as I still read snarky (and generally untrue) comments about it. But the end result is just really well done, as comprehensive a megadungeon you will find. The science fantasy it touches upon might not be to everyone's taste, but clearly does follow the style of the original game.