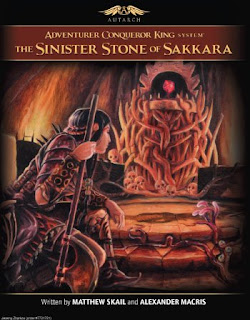 This keep on the borderlands is essentially a Roman style border fortress similar to that used in Hadrian's wall in Britian. Only in this case, it's part of a defense system against a middle eastern sort of empire, the "Zaharan" which seems to be somewhat Mesopotamian (Babylonian, Sumerian, Hittite, etc). It is described in meticulous detail over the course of 25 or so pages, including blown up maps of most buildings, things like the inn and hospital and stables. Almost a whole page is given to a random banquets table.

On the other hand, this level of detail doesn't apply to the inhabitants of the fort. Out of the dozens of NPCs listed (and probably hundreds that live in the place), only ten are actually named, all of whom deal with the running of the fort. Still, these ten do get a fair amount of detail, totaling four pages. Strangely, no portraits of any of those people. I have to think this was done deliberately as a homage to Keep on the Borderlands, where every NPC was simply referred to as a title or job name. 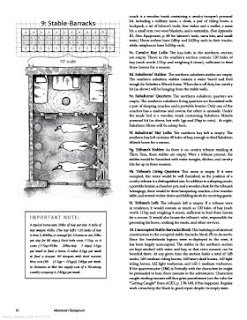 On to the dungeon itself. There are two levels. The first gets 18 pages and has 80 or so keyed entries. The second level is about half the size, 10 pages and 40 entries. The striking thing about the first level is that the map looks realistic, like it was the floorplan of a real temple complex. It's also a well designed (by my standards) dungeon, where there is a lot of freedom to explore, where it's not linear, and where you can reach the "bad guy" after only a few rooms if the party is lucky (or unlucky, depending on the point of view).

While the dungeon map itself is pretty neat, the contents of the first level are pretty standard, especially among Keep on the Borderlands clones. Each section of the dungeon is essentially ruled by a different faction. Kobolds, brigands, orcs, goblins, and hobgoblins each "own" a section of the dungeon. Each region is more or less what you expect — barracks, dining hall, storage, empty rooms, room where the chief lives. Most of these factions in the dungeon are amenable to being bribed or possibly allied with against other the factions. The last section though is ruled by a small dragon, and the PCs need to get past him to get to the second level.

The second level mostly continues in a simlar vein at first (only with gnolls), but then has more original and weird stuff. Lakes of blood, pools of abominations, and then finally a showdown with the main villain. This is a class unique to ACKs, a "Ruinguard" (actually from the ACKS Companion, I think) but is basically like a Fighter/Magic-User, albeit with some unusual spells (and lucky for the PCs, she doesn't know sleep).

While many of the rooms have been repurposed by the current inhabitants, the original purpose of most rooms are described, including any artwork or inscriptions. Including one room that has pornographic frescues, which has an illustration of said frescoes, making the product (at least that page) R rated. Or possibly X, depnding on how close you look at the picture. While I actually admire including such a thing, as ancient cultures were far, far, far less prudish than modern days, it seems a bit out of place because the rest of the adventure is squeaky clean, nary a brothel or even a random harlot in the keep

There's also a few maps on the wilderlands around the region. A couple pages of random encounters and then in the back, a mini-hex crawl where it suggests using various other modules. Lastly, there is a nice section on pre-generated characters. 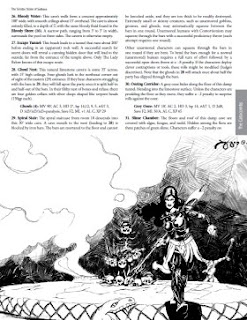 All in all, it's a nice looking product, clean layout and very readable. The art is a mixed bag. I really loved the stuff by Michael Syrigos who does most of the main illustrations. He's got an intriguing style that reminds me a bit of Earl Geier. On the other hand, there is a lot of (imho needless) filler, which seems to be stock art by William McAusland (and which you've probably seen over and over in OSR publications.

Whether or no you will like The Sinster Stone of Sakkara really depends on what sort of product you want. Do you want a module that focuses on keeping track of how much hay is needed for a stronhold? Well, then this is your product. Do you want a very faithful (perhaps too faithful) homage to a classic? Do you want a starter dungeon with standard D&D monsters? Then this is worth picking up. Do you want something gonzo, or something different? Well, then you should probably pass.

Regardless, while it's not the most original module, it's very well done and is a great value.  Absolute steal at $5 in PDF>