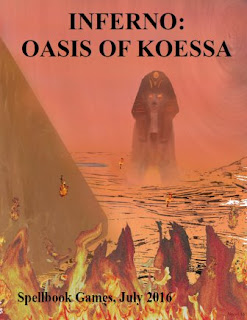 Inferno: Oasis of Koessa is an adventure module from Paul Elkmann and Geoffrey O. Dale, the latter known to old school gamers as the author of the Inferno hex crawl for Judges Guild, which was literally set in hell as envisioned by Dante.  That only had 4 circles of hell, but he included a 5th circle in one of the issues of Fight On! and then apparently finished the rest in a stand alone product.

As the name implies, Inferno: Oasis of Koessa is set in hell (the 7th Circle), basically a small oasis consisted of some sphinxes, a funerary temple, a tower (obelisk), and some small pyramids, ruled over by a mummy king. In practice, it's a collection of dungeons. The largest is a sphinx, with just over 100 keyed locations and 20 pages. The funerary temple is 14 locations and 5 pages, the tower 11 floors (one per floor) and 4 pages, the tomb is 16 locations over 6 pages, and the pyramids are about 12 locations and 5 pages each.

For the most part, all of these places are old school dungeon crawls. Very old school, they very easily could have come out of a Judges Guild product circa 1980 (as did the original Inferno).  Lots of combat, lots of death traps (two or three saving throws per room seems to be about the norm), with the occasional very strange thing that makes you laugh and say "That's crazy!".  My favorite example of the latter is a dwarf polymorphed into a chimp that throws bananas at the PCs, some of which explode. 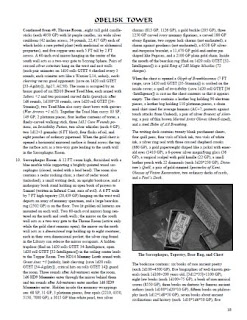 Although it clearly has both an Egyptian and hellish theme, occasionally it slips into other things. For instance, for some reason there is a "Rajah's Pavilion", which is like a hotel (that really knows how to deal with deadbeats). But a rajah is Indian. Though for that matter, the mix of Egyptian and Christian mythos is a bit odd to begin with. It might be easier to simply replace all devilsh references to Set or some such.

The difficulty of the dungeons are somewhat hard to discern. While the various traps and things that the players might interact with is obvious enough (and really deadly), monsters are another thing entirely. Although advertised as being compatible with 1e (and 2e), it really uses the authors own system which uses its own unique terminology and scale for everything besides hit dice (and even then, I'm not sure because many 10 hit dice monsters only have 21 hit points) and treasure (gold pieces).

Other than that, you're basically on your own when it comes to monsters, even AC bears no resemblance to anything I've seen (it goes up to 70, beating even Pathfinder). And NPCs are much worse, almost a complete listing of gibberish that seems like something out of an FGU game. A FGU they never published because it was too confusing for even them.  Though probably not SPI.

The authors also use some very strange abbreviations constantly. For instance, in their system, saving throws seem to be based on ability scores. You constantly see something like "save 1d20 GTET [30-Stamina]". Whether you like his system or not, it seems like half of that is superflous. Why not just "Save 30-Stamina"? I mean, if the saving throw mechanic is always rol a d20 greater than or equal to a target number, you don't always need to say so. Strangely, he also insists on using FT for feet, as opposed to the more usual ft. or better yet, just use the ' sign. 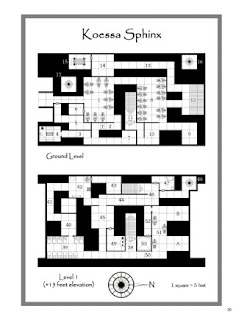 The PDF is easy to read, 2 column, nice font size. It does something I've never seen before, when a room description covers over to the next page (which is most of the time), he puts at the top fo the new page "Continued from (room #)(room name)". It's somewhat unnecessary, but an interesting touch.  On the downside, the PDF is set to the dreaded "Single Page Continuous" and zoom level to "Fit to Width".

There's a handful of art (mostly greyscale), but a large number of photos of physical model of the dungeon, apparently used to help run it at a convention. Sort of neat looking and definitely adds to the old school vibe.  The maps are also old school, simply black and white, but well detailed. They are also somewhat scattered throughout the PDF.

Inferno: Oasis of Koessa is more old school than OSR. Is that a good thing or a bad thing? If you are one of those people who would rather play Tomb of Horrors for the 827th time rather than try an OSR adventure from the 2010s, I guess that's a good thing. You now have something "new". On the other hand, more modern players might find it to be an unfun slog.

Still, even as a framework or idea mine, it's not a bad value at $3.99. I'd almost say it was worth it for that polymorphed dwarf throwing bananas. I never would have thought of that.
Posted by Jeremy at 1:48 AM