The Lunar Library of Thurindisar Review — A Trip to the Moon with (almost) Jedi and Daleks in 15 pages, 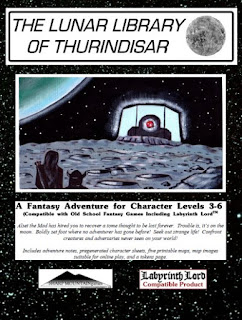 The Lunar Library of Thurindisar is a short adventure module from John Fredericks and Sharp Mountain games, the third one of his that I've bought. The first two were good but not great, but this one hits the great mark and then some. Like his other modules, it's meant for low-mid level (3-6) Labyrinth Lord and is set around a town called Adela. But as the name of the module implies, the adventure might start at Adela, but most of it takes place on the Moon.

Essentially the local mage is looking for a certain rare spell, which was known to be in the spellbook of a magic-user named Thurindisar. While most mages seem to be make do with towers, Thurindisar wasn't satisfied with that and lived on the Moon. So the PCs are hired to go there, sent by a magical telescope, to recover the spell.

The Moon of the module is sort of like our Moon. Airless, so the PCs also get some magic to help them survive. But the module Moon also is inhabited by friendly moon people and a small number of moon monsters that will get in their way as they travel to the library. Things really get crazy when they actually reach Thurindisar's home.

Basically someone else is looking for that very same spell the PCs were sent after. Evil aliens which bear some similarity to Daleks, at least in personality (they actually look more like flying toasters) and their hired thugs, who aren't too bright but have rayguns. They also encounter a friendly library robot and what is essentially a Jedi, a "Paladin of Space" which is apparently one of the authors rule supplements (but is summed up in the character description).

This all takes place in a really modest sized home, especially for a wizard, only about 10 rooms across two stories. All the monsters in the module are new, including the one encounter on Earth (which is also a bit of an unsolved mystery)

The author is also an artist so there are quite a few illustrations, the quality of which ranges from passable to pretty good. As with his other modules, he's included battlemaps and counters for playing this via a virtual table top.

Much to my delight, the default settings of the PDF are "Single Page" and "Fit Height" so I don't have to spend 2 seconds changing them to that every time I open it. This is a minor thing, but I've never understood why you don't see more of it.

My favorite part of the OSR are the "do it yourself" style modules from one (or two) people, as opposed to the more professional stuff or Kickstarter projects. There's a fair amount of "meh" in those, but it's good, honest "meh" that someone worked hard for just for the love it, not for the money. And occasionally you end up with a real gem, like this, The Lunar Library of Thurindisar.
Posted by Jeremy at 1:38 AM