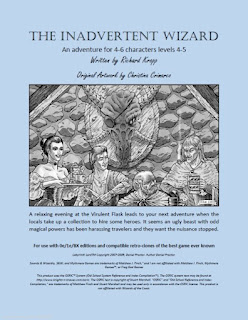 The Inadvertent Wizard is a short adventure by Richard Kropp ("Coach K"), currently costing $3.50 in PDF and running about 20 pages. The title refers to a troll who has come across a variant magic item, a helm that lets the user not only read languages, but use scrolls (albeit only 1st level). He uses his new found powers to terrorize, or at least mildly irritate, the locals of a swamp or bayou. Presumably the PCs will put an end to his reign of irritation by killing him, which involves a short wilderness journey and small dungeon crawl.

It's meant for 4th to 5th level characters and includes stats for the three main flavors of OSR: 0e, 1e, and B/X. I think that level range is probably a bit too high, 3rd to 4th is probably closer to the mark, at least for 1e. There's basically one possibly difficult fight, with the troll, or more specifically, his pet, a giant alligator gar with 8 hit dice, doing 4-20 damage and the ability to swallow a character whole.

At any rate the adventure starts off in the tavern in the very small village of Jack's Bayou (which is a bit odd of a name for a bayou, should be Jacques or Jean). It's got 6 places detailed, including of course the local tavern and trading post as well as stores that will have useful bayou adventuring equipment (boats and anti-itch medicine). Almost every adventure (I know mine do) have these basic locations and the trick is making them stand out. Here it's done with something of a comedic tough, the owner of the tavern is a retired 8th level fighter who sells BBQed stirges and a drink so potent it can dissolve trolls. The trading post is run by a frustrated and slightly shady rival of his for the town mayorship.


Essentially the PCs just travel to the location of the troll's lair (though that this even exists is not obvious at first), which requires either travel through the woods or along the river. In either case they run into a handful of random encounters, river pirates and fishermen on the river, stirges and woodcutters on land.

The lair is a 12 room cavern. While the encounters are pretty standard, the details are interesting in spots. For instance, the troll is something of an artist, even before he had his magical helmet, and his work can be found in a couple of rooms. Rather than treasure being assigned to each room, it's done like in B1 In Search of The Unknown, blank boxes and then a list of treasure in the back you can put.

The module is pretty standard do it yourself quality, though the author has the good sense to have the PDF default to "Single Page" and "Fit To View" which makes thing so much less of a hassle when opening on a computer. (I know I go on and on about this but it's a pain if it's not set to that). The art has a handful of original pieces and stock art from Outland Arts. The wilderness map is made with hexographer and town map from Raging Swan Press (both of which I use in my modules). The dungeon map is from Davesmapper which is also pretty common to make caverns (though I think the results are kinda ugly) 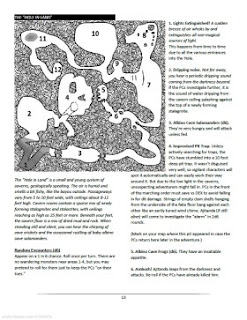 By far the best part of the module is the development and back story given to the troll and his pet. It's just utterly charming. To the point where you like the two of them and hope the party doesn't actually succeed (since neither the troll nor his pet actually harm anyone except those that attacked first).

The Inadvertant Wizard is one of those labors of love that I like so much in the OSR. While it's a competent enough module, part of me can't help but think it would have been better as a children's book. As is, its short length makes it best really used as a side quest or filler while on a journey. At $3.50 it might be a little steep for that, but it does have a couple of pieces of original art.
Posted by Jeremy at 5:23 PM