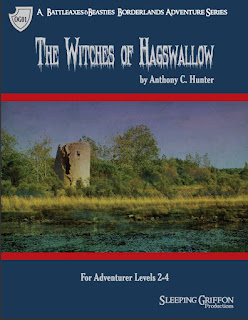 It's written for the author's Sword & Wizardry based game Battleaxes & Beasties, which I do not own. From looking at the large list of pregenerated characters it seems to be quite a bit more high powered, with magic-users (called wizards) having a more spells and at will cantrips and fighter type characters doing a lot more damage, generally 2d6 or 2d8 with their primary weapon, plus a bonus. Sadly, it keeps the worst part of S&W, the single saving throw. Regardless, the system doesn't really show up much in the module and can be used as is with virtually any other OSR game or old school version of D&D.  At worst there are some differently named spells, but they are obvious

As mentioned, the adventure, though site based, is essentially in two parts. Storming the harpy's tower to free the prisoners, then coming back to sack the dungeon. This is actually a pretty clever idea and in essence, it's two completely separate dungeons, one small tower crawl and one medium sized dungeon crawl.

The 12 location harpy tower is pretty much what you'd expect from a harpy lair. Harpies and more harpies. But to change things up, it also includes their pets, which consists of attack frogs, a kobold, and a giant snake. There's also an appearance from the dreaded R.O.U.S. which should bring a smile to the face of Princess Bride fans. 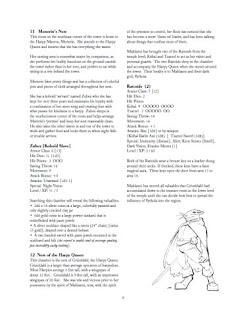 Harpies and other flying opponents can be tricky for both DM and players. To a certain extent, it can be hard for a party to actually beat them, since they pesumably can't fly while the harpies can. Unless your players have something like laser weapons or can throw rocks like a giant (which is unlikely for a 3rd level party), ranged weapons in D&D are kinda weak, letting the harpies use hit and run tactics or flee when they are too badly wounded.

The dungeon is more interesting, if someone linear, though that's hard to avoid in small-ish dungeons (23 locations over 3 levels). It's devoted to a Lovecraftian style Great Old One, at least I think so given the description of the others in the mythos (Cthulhu, Tsathoggua, and Bast clones), but the specifics one here seem to be more like Vecna (at least he's missing an eye). However, most of the cult members in the temple are fairly mundane, the only thing hinting of Lovecraftian horror is that the ghouls are not undead, but living, and overall there's not a huge "wow" factor as in "wow, this is really cool", but there is the occasional "that's pretty neat".

What does set this module apart from the norm is the tiny details the author added, particularly in the treasure. While some things are simple coin rewards, in most cases items are quite unique. This also extends to the personalities of the prisoners and such, they are given a line or two that sums them up.

On the other hand, the physical descriptions of the various NPCs or even monsters are quite sparse or non-existent. This makes it easier to change to your setting, but realistically most people use a generic vaguely European one. Also curiously, while the big bad god, Vyrkola, has bas reliefs and such all over the temple, just exactly what he looks like is not described. Other than he must be humanoid because he can hold a spear. 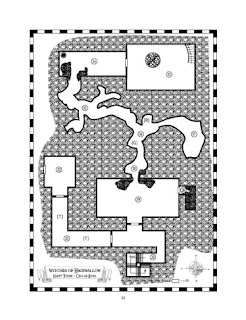 As I don't have the rules system it's meant for, I dunno how xp works, but strictly speaking from a 1e perspective (which it's not written for but what I use basically) it's pretty loot light, at least in terms of gold piece value. I would keep the treasure and just raise the value of various things and make some of the weapons found magical (there's a gaudy two-handed sword that is just begging to be intelligent)

It's a nice enough looking PDF, albeit set to the annoying default of single page continious and zoom to fit width. It uses a handful of stock art. The maps are seemingly original and are very nice looking, but lack lines or hexes so it's hard to get a good read of the scale. The maps in the original PDF cause both my tablet and PC to choke, but thankfully there is also an optimized PDF that does not have this problem. As well as separate downloads for the maps and pregens and maps for virtual tabletop use.

I won't lie, I mostly bought this because it was really, really cheap (as I use the credit my own modules and things at DTRPG bring in, which is generally about $5 a month), normally $2.99 and on sale (still as I post this) at 49 cents. But it's a solid adventure. Maybe not super original, as basically your players are basically fighting zombies, skeletons, ghouls, and rat people, I would have liked a bit more strangeness. bit what's there is exceptionally well done and will be buying the next module in the series at full price (which thankfully still won't break the bank).

Email ThisBlogThis!Share to TwitterShare to FacebookShare to Pinterest
Labels: Battleaxes and Beasties, Review, Sleeping Griffon, The Witches of Hagswallow