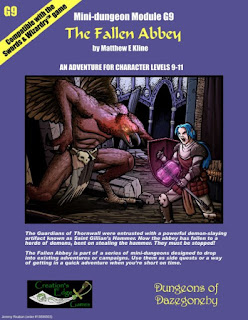 Creation's Edge has put out a very large number of modules (something like 35) for Swords & Wizardry (and White Star), mostly small unconnected series that start at level 1-3 in the first module, then work all the way up to levels 9-11. They are nice if you need a mini-dungeon for a session. As I run a 1st edition based game and have a party around 5th to 7th level, I tend to only buy the ones that are at the high end, as is the case here with G9: The Fallen Abbey.

The premise is a bit at odds with D&D game rules. Basically a famed paladin was given a powerful warhammer by his god to help him slay demons, but was cut short in his career by a dragon. Instead of that god's followers simply casting raise dead (which is even more common in OD&D than AD&D), a sect of druids decided to enshrine him and his belongings in an abbey. But then that abbey was attacked by demons (thus the title) and presumably it's up to the PCs to clean it out. 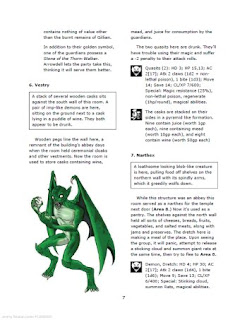 So in essence, it's an "abbey crawl", with the party going from room to room wiping out demons with no exploration or role-playing, really. By and large they are mostly standard demons — vrocks, quasits, hellhounds, led by a herzou, but there is a new type that is seemingly meant to be sword fodder. Called Sithrexi, they are bald headed snakey humanoids who are not particularly tough (6 HD and damage by weapon) but have a cumulative 10% chance of poisoning its victim.

There is a pretty neat scene when the PCs finally reach the hammer. And speaking of which, while here's not a whole lot of loot, the demon slaying hammer is pretty fearsome (unlike say the weapon in Liberation of the Demon Slayer). It's a +1 hammer that's also +4 vs demons and will destroy any demon of 3HD or less. On a roll of 20, it will also automatically destroy any demon with HD equal or less to the level of the wielder. There is a save allowed in the latter case, so maybe not so fearsome (that's going to be made most of the time by high level monsters). The hammer has a catch to it, the wielder has to kill a demon a week or lost a level. That's a pretty big catch if your game world isn't swarming with demons.

Like other Creation's Edge modules, it has a clean overall look with two columns of easy to read text and the occasional piece of stock art, most of which you probably haven't seen. The PDF defaults to fit to height and single page which is always a plus in my book, as it can be used on a computer without fiddling with settings. On the downside, the map is located in an odd place 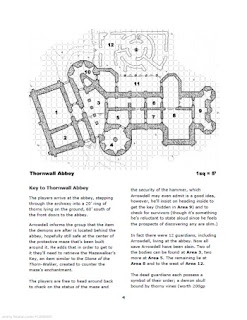 The Fallen Abbey is  not one of the better ones from Creation's Edge. It's mostly combat orientated with little in the way of anything else. That's not necessarily a bad thing, but there's a definite lack of monster variety and interesting loot, which are keys to hack and slash orientated adventures. There's nothing wrong with it, but has no "wow" factor or even "that's neat", it's serviceable.
Posted by Jeremy at 1:05 AM