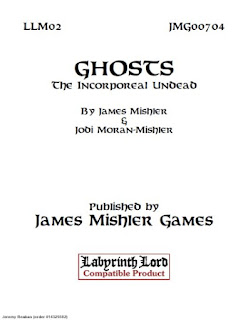 One of the staples of the RPG industry since about 1990 or so is the "sourcebook", basically one really detailed look at one aspect of the game (or setting), be it a class, a place, or a type of monster. Perhaps because of the rules light nature of the OSR, there really has not been much of this — a few books on cities, detailed looks at witches by that guy who really likes witches, and a few general supplements on magic.

Ghosts — The Incorporeal Undead from James Mishler & Jodi Moran-Mishler is another exception. It's one very detailed look at the ghost, or incorporeal undead, as monster. In many ways it reminds me of one of the Von Richten's Guides for Ravenloft 2e, but it's written in a much more casual, breezy style (and a number of jokes). Plus it's written for Labyrinth Lord and thus the old Basic/Expert D&D set as opposed to AD&D. (As I am mostly an AD&D guy I am not always familiar with D&D monsters and their differences.)

It essentially consists of three parts: different types of ghosts, once for every hit dice from 1 to 10, unique powers said ghosts might have, and various additional rules to deal with ghosts. 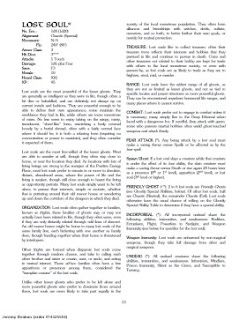 It essentially consists of three parts: different types of ghosts, once for every hit dice from 1 to 10, unique powers said ghosts might have, and various additional rules to deal with ghosts.

B/X has two ghost like monsters, Spectres at 6 HD and Wraiths at 4 HD. This essentially extrapolates weaker and strong monsters from these two. On the lower end you have the presense, the apparition, and lost soul while on the upper end you have the phantom and the geist. All have differences that make them unique other than just their hit dice, but they are all clearly relatives (so to speak).

On top of this there are 75 different special abilities that each ghost may have. Actually, these generally go beyond just adding a special ability (such as an attack or defense), often they provide a background or type to a ghost. Two extreme examples being the alien or robot ghost. More mundanely, you have the drunken or hungry ghost, who are still so in the afterlife. There's the nanny ghost, who takes care of children...by turning them into ghosts.  And sometimes they alter the demeanor, most notably the "friendly" ghost.

One of the more intriguing parts of this is the ectoplasm that these ghosts can leave. Ghosts with different abilities leave different sorts of ectoplasm which can be used by the PCs in different ways, usually consuming the ectoplasm like a potion (or smoked in the case of the pipeweed ectoplasm).

Like other products from James Mishler Games, the layout and look of the PDF is more about functionality and useability than anything else, with fully functional bookmarks.  It also lacks artwork, so the 64 pages is probably comparable to 96 page books with artwork. 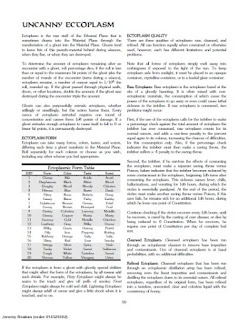 Ghosts — The Incorporeal Undead is pretty much the most definitive product on D&D ghosts, including the official stuff, much less the OSR. But ultimately the usefulness is limited simply due to the nature of higher level undead in D&D — specifically level drain. If your players are like my players, they won't go near anything that even hints of undead, because odds are good that many of them will end up the adventure in worse shape than starting it.

It would though be extremely useful if you would are running a game based around horror — like a Ravenloft game (with all the retro-clones, I'm surprised no one has made a knock off of that setting, though maybe not since 2e isn't considered "cool"), or any sort of supernatural game involving ghosts. While there's a fair amount of rules here, much of it is really good ideas.
Posted by Jeremy at 1:05 AM