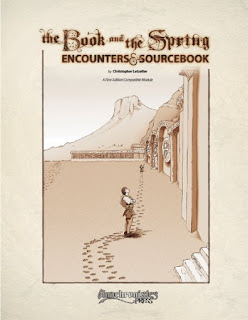 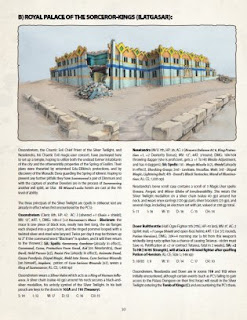 The ruined palace has been taken over by a cult. It's three floors, first floor, second floor, and dungeon. Most of the encounters in this area consists of their guards, which are a mixed band of gnolls and cultists. In an interesting touch, the leaders of the gnolls, flinds, have proper names. It's more of a stronghold than anything else, so rather than exploration it's more about combat.

The tomb is pretty much what you expect from a tomb, partially filled with undead (plus a few gnolls) as well as tricks and traps. The ultimate villain here is a spellcasting mummy. The last, the ruins of a hanging garden, is where the Sumerian flavor really shows. It's the lair of a lamia and her followers.

There are essentially three factions at play; The cultists (including the gnolls), a group of descendants of the original city who moved elsewhere, and the lamia and her followers. There's not a huge amount of interaction between the three, but it could be developed. 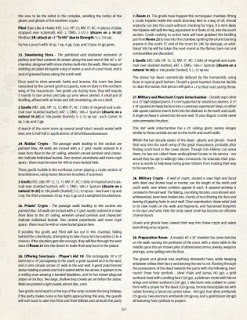 The maps look realistic, based on real world Sumerian buildings and tombs. And as such, aren't linear. Nor is there any obvious order as to which large structure the PCs would want to explore first.

While I would say the bulk of the monsters are standard ones, taken from the three AD&D monster books, there's also twelve new ones, detailed in the supplemental book. These include the sirrush, girtablili (scorpion men), and gallu, which you've all probably heard of. It also adds the ghastly Dahak, which is like a chimera with skeletal heads, a bat demon, a golem, and some more monsters, lizards and carnivorous cactii. 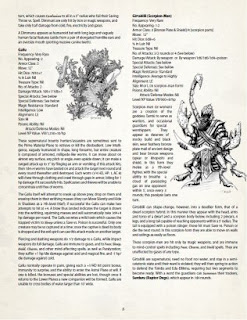 As mentioned, this is made up into two PDFs - one with the adventure keys and the other with supplemental information, like new monsters, illustrations for players, and of course the maps.  This actually makes some sense, at least on PC, because otherwise I often have to use two different PDF readers to view a PDF so I can see the map and the encounters at the same time (since I could never figure out how to open two copies of the same PDF in the same PDF reader).  They are nice looking, with largely original art (I think, at least I haven't seen it) and in color in most cases.

The maps are especially well done, looking like something that came out of a university textbook on archaeology. 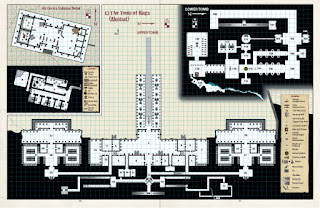 The Book and the Spring is an excellent site based adventure. It reminds me a lot of the old Necromancer Games semi-sandbox adventures (which is what they built their reputation on), only with actual 1st edition in this case, not just the feel. On the flip side, it can be a bit dry at times and there aren't any memorable NPCs save the guy at the end (or what is probably the end), a deva in disguise.

All in all though, it's a must buy for 1st Edition fans and those looking for something a bit different.