The Lost Valley of Kishar — More Trouble Than Treasure, For Misery Tourists Only 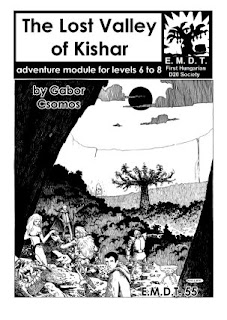 The Lost Valley of Kishar is a site based adventure from Gabor Csomos from Gabor Lux's (better known as Melan) imprint, EDMT. As such, it's not surprising that it has a strong sword & sorcery feel, though this is almost taken to the point of cliche. While apparently for 1e (levels 6th through 8th), it uses its own house rules, including things like morale, and is extremely stingy (by design) on the treasure, both magic and mundane.

Essentially it's a small valley with a number of locations, though even calling them mini-dungeons would be a stretch. It seems that the valley has a magic tree and this magic tree was worshiped by followers of a fertility deity (Kishar). They lived there for a while until an evil magic-user came in and took over the valley, corrupting the tree and using it to create magical beasties. But the priestesses recuited an army of heroes who defeated them, but all died in the process (and despite being D&D, didn't have access to raise dead for some reason), leaving the valley more or less deserted and open for the remaning monsters people to slowly fill the power vacuum.

So the PCs goes to this valley for some reason. Certainly not for treasure, as there really isn't any. But apparently they might get hired to capture a flying gorilla (who live in the valley) for some guy who presumably did find treasure somewhere. I mean, I know I love taking my 8th level character on a job to capture a flying ape. What is more D&D than that? 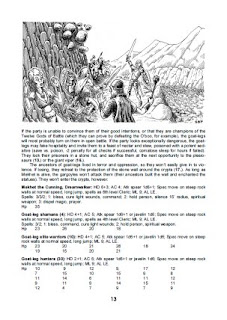 The catch, perhaps, is that the flying gorillas are the "good" guys of the valley. Basically the protector of a jungle queen type. Almost everything else in the valley is hostile. You have a race of goat men, moth-harpies, the head of a lich, some dinosaurs, and most interesting, a race of very alien looking aliens. They look like something that could have come out of Lovecraft's later, Sci-Fi period.

Basically they are three legged beings that look sort of a cross between an Elder Thing and a Yithian. Very creepy. The latter have a crash landed spaceship which is surprisingly small, but also contains, somewhat oddly, a scorpitron from the Wasteland series (sort of the iconic boss robot). While I find that neat, it doesn't make sense why aliens would have something shaped like an Earth creature.

While certainly inventive at times, the text is not overly descriptive when it comes to characters. What does the jungle queen look like? She's beautiful and feline. That's helpful, I guess, but what color is her hair? Buxon or slim? And her stats do nothing to indicate how smart or wise she is, as it's just hit dice, alignment, AC. Another annoyance in stats is that no movement rate is given. I would argue that movement rate is the single most important stat of a monster, as it determines if the party can just run away or not. 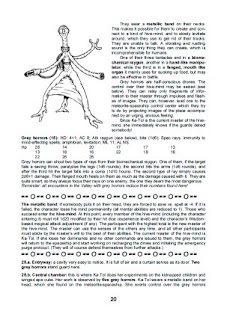 It does have all original art, but it's fairly poor quality. I guess the idea was to resemble the pulps of the 1930s, but they actually had better artists. Oddly, the best art in the module seems to have been done by the author himself. Although 36 pages, there's not as much text as that implies, as it's single column. The font isn't as big as those producting mimicking the look of the little grey booklets, but there's not a lot on each page. The maps are rather vague, any sort of detailed exploration will require the DM to make his own map or just wing it.

The Lost Valley of Kishar represents both the best and worst of the OSR. It's clearly a labor of love, but at the same time, also really pretentious, cliched, and overpriced. Most importantly, there's really no legitimate reason for the players to get involved, as there is really no reward, just misery tourism. But that's something much of the OSR seems to love for some reason, so YMMV.
Posted by Jeremy at 11:20 PM