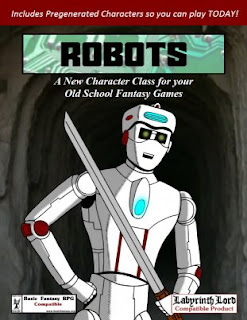 Robots! Although arguably the heyday for them in fiction was the 1950s, I discovered Isaac Asmiov as a teenager in the early 80s, a man who probably put more thought into his robot stories than anyone. I also later discovered the works of Clifford Simak, who although lacking the scientific background of Asimov and typically writing stories in a pastoral setting, absolutely loved robots. Not as props, but heavily developed characters.

Robots from Sharp Mountain Games is not the first attempt to bring a robot character class to the OSR.  The first was perhaps the Automaton class from Barrel Rider Games (flavorful, but like the UA Barbarian, saddled with huge XP costs), and a couple years ago, I came up with the OSR Android. This though is more like the more traditional SF robot, the sort favored by Simak. At least in flavor. 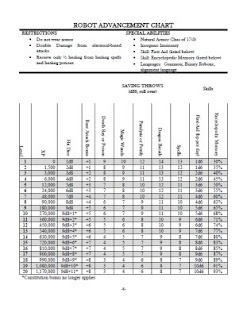 In game terms, though, it's basically a fighter that can't wear armor (but has an AC equal to plate) that also has the ability to heal a little bit a day (starting at 1d6) through first aid. It also has an encyclopedic database of knowledge that also goes up as he levels.  As this is meant for Labyrinth Lord and Basic Fantasy RPG, it's scaled for 20 levels.

Although the description of robots mentions other types, such as an R2-D2 or the rolling ball from modern Star Wars, there's only one type of robot presented, nor is there any sort of optional powers or abilities to pick from.

While the cover is hand drawn by the author, it also uses a lot of stock photos/poser art from some stock photo service. I am generally not a fan of stock photos in RPG products, seems out of place, and loathe poser art in all its forms.

I am a big fan of classes and I've liked some of those from Sharp Mountain Games a lot — The Paladin of Space, the Gambler, and the Space Elves comes to mind. But Robots is just not enough to make it seem like the character is a robot.
Posted by Jeremy at 11:56 PM