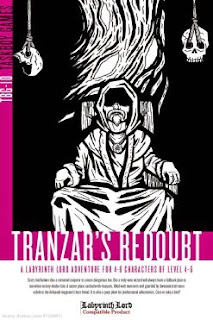 One of the things that has puzzled me about the OSR (and old school D&D fans in general) is the love of randomly generated dungeons (or wilderness). I've never found those particularly appealing because D&D is far more than just monsters in rooms and killing them for their treasure. Oh sure, some of that is fun, but it's also about exploration and encountering weird and unique stuff, which gives a sense of wonder, a sense of the unknown.

Tranzar's Redoubt, a Labyrinth Lord module by Joe Johnston and Task Boy Games, has exactly that air of mystery in its encounters that I think is essential to D&D. In its 20 locations, players will encounter an ettin salesman, a casino full of undead, a dragon who talks in his sleep, and a tea party among other things, like traps and riddles. Just exactly the sort of thing you can't generate randomly. Yet it doesn't descend into silliness, all the things are there for a reason, and are plausible and rational given its design.

It features a mix of standard and new monsters, maybe 1/3 of the latter. While for 4th to 6th level characters, it features a fair number of tough (at least in terms of hit dice) monsters, so I'd say it leans towards the latter level range. The tough monsters do tend to have less hit points than average, though, closer to 3 hp per hit die than 5. While not everything needs to be fought, the encounters are generally well crafted, with multiple monster types in many cases, but nothing overwhelming to run as a DM. 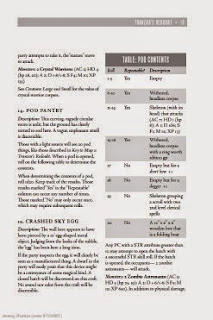 Taking out the padding, the PDF is about 40 pages, with two column text on most pages, but not a lot of words per page. Still, almost every room is elaborately detailed, both with a description of the room's appearance (not boxed text, but close) and the contents, which often include a table, either for a random effect or just listing the treasure.

Besides the adventure itself, you get a couple of handouts, one for a casino game and a roster of pre-generated characters, complete with background information and equipment. Nice touch.

About my only quibble with the product is the map, drawn by Dyson Logos, which is spread across two pages, right in the middle of the PDF. It probably could have fit on one page if aligned vertically, and I ended up having to copy those halves of the maps and sticking them together in a paint program. Not too much work, but...

Tranzar's Redoubt is a well designed, imaginative and most importantly, fun dungeon. At $1.99 it's a steal. It reminds me of the better Judges Guild adventures, only far more coherent and professional looking.
Posted by Jeremy at 5:23 AM