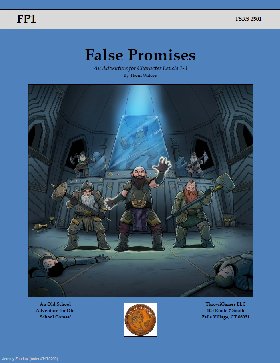 False Promises from Throwigames came out last year around the holidays. I didn't get it at the time since it was $5 for 20 pages, a bit too pricey for my budget for a blind purchase, but the price was later dropped to $2.50 which is more in my wheelhouse for modules I know nothing about. Indeed, I didn't know it when I bought it, but apparently it's a conversion to B/X D&D of an older module written for the company's own house system. Regardless of its origins, it actually sort of feels and looks like a late '90s 2e product than anything else.

The structure of the adventure is somewhat linear, yet there are a lot of sidequests and extra places to explore. Essentially a dwarf mining village has not been heard from in a while, so the PCs are sent to discover what is wrong with it. Turns out the dwarves unleased an ancient evil and the town has been wrecked. The PCs must comb through the wreckage as something of a village crawl and deal with the horrors left behind, including one out of five released villains (the rest are presumably dealt with in later modules). 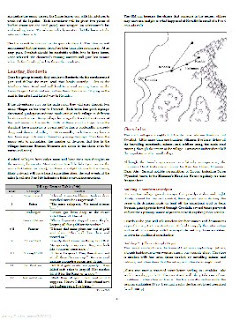 While the core adventure is rather simple, the level of detail in describing the ruined village is quite nice. There are 37 different buildings to explore with descriptions from a short paragraph (3 sentences) to several paragraphs, including items of note. It generally feels like a real place, but on the flip side, that realism means that most of the places and things are ordinary, and there's not much variety in the monsters encountered. The mine adds 8 more locations, including an encounter with a new monster, red slime.

Once the place is cleaned up, the PCs can go on a side quest to rescues a town member who fled into the arms of goblins (6 more locations), and then visit the survivors, who moved to a hidden camp in the mountains that just happens to sit on top of a necropolis. This last place, consisteing of 8 rooms, is the closest thing to a traditional old school dungeon crawl in the module. Also the only real source of treasure in the module.

As mentioned, the layout of the book reminds me of some of the later 2e modules. Tiny print and 2 columns of text. In this case, it uses 8 point Book Antiqua, even smaller. I had trouble reading it on my tablet even with reading glasses. 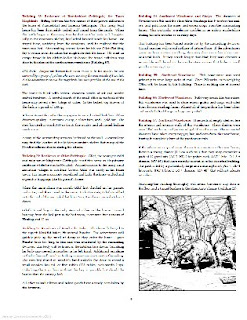 While I had misgivings over the price, considering the extra stuff, it turns out to be a solid value even at $5. I've seen products about the size and scope of the side stuff going for $2-3 on DTRPG. But the main questline has a few issues.

Firstly, there's not a lot of variety in opponents. Basically it's the same type over and over and over. The only other opponents are (possibly) giant rats and a new type of slime. Secondly, there's a severe lack of loot. That can be a problem in rescue mission type adventures, but at the same time, old school games are based around the acquisition of loot for character advancement, and the Baron (the guy who sends the PCs to the dwarf village) only offers the princely sum of 100 silver pieces. Even if that were gold pieces, that would be pitiful.

Still, it's worth a lot if you are looking for a module with a plot, or like dwarves. You might wish to wait until the last installment is out, though.
Posted by Jeremy at 5:07 AM