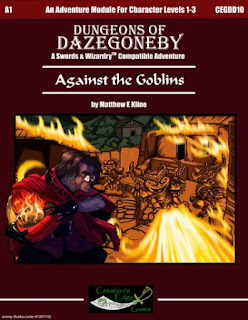 The module starts with the PCs drawn to a small town by being plagued by dreams of it being attacked by fire wielding goblins. These dreams recur nightly until the PCs decide to go there. If not, eventually the fire in the dream causes them actual damage, until eventually they are killed. I usually prefer using a carrot instead of a stick, but it's easily changed.

At any rate, the adventure assumes they do indeed go to this village, Sooner's Field.  This village essentialy serves as a home base and is reasonably well described, complete with map and 14 or so locations. One of these, the inn, gets a floorplan and there are price lists for the various shops. A number of NPCs are given stat blocks, but no ability scores. There is a 7th level cleric who (thanks to being for S&W/OD&D) can cast raise dead, but otherwise seems more like a druid (which I think is in S&W Complete, since Druid was an official OD&D class)

The first segment of adventure involves a visit to a ruined wizard's tower, inhabited by the fire using goblins (which the dreams were about). It's a relatively small tower, 3 storeys and 11 rooms in total. Not surprisingly most of the combat encounters are with goblins, though there are also animated books, called Hell Books. Still, other than a dretch who is stuck, it's a fairly straight forward. 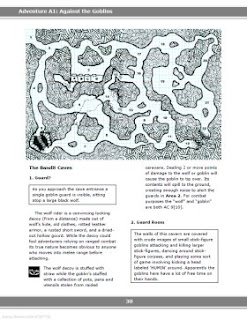 The next segment is complex of goblin infested caverns. This features 21 areas and again, mostly full of goblins, this time goblins that cause disease. Probably the weakest section.

Last is I think the best dungeon on the module, a necromancer's lair that has be taken over by goblins that can animate the dead. So not only do you have goblins, you have zombies and skeletons. There are also NPCs to rescue, including one very funny scene involving goblins trying to eat a horse.

The treasure tends to be rounded to the nearest 1000, which annoys some people for some reason. There are a number of new minor magic items. Some treasure is determined by random tables — for instance, the PCs might search a bed, and there is a table to roll on if they do.  I realize some people like random tables like that, but it seems like it would have been easier just to have a list. After all, one of the reason for adventures is not having to prep.Then again, you can use the table as a list. So...

The art is all stock art. Most of the portraits of NPCs come from a product entitled something like 101 Terrible Portraits. They aren't that bad actually, but the artist has trouble drawing noses, or rather, the part between the nose and the mouth, he puts a strange squiggle there which is odd looking. 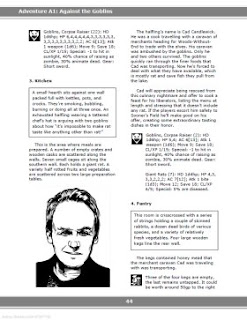 Like the rest of his modules, it's a very clean easy to read layout, including regular sized text in two-columns. Also pretty easy to run from, with the exception of maps being somewhat willy nilly (I find it easier if they are all at the end). Also a plus, the PDF defaults to "Single Page", which is like flipping a book. So many PDFs default to "Single Page, Continuous" (which is like reading a scroll) or even the dreaded "Two Up".

Against the Goblins does a good job of taking a common, somewhat boring opponent and doing something to make them interesting again. Or at least different, without changing them radically or doing something dumb.

While I suppose you could use the premise of the module as is (dreams send to force the PCs to help the village), it can easily be changed to the PCs simply being in the village while being attacked by the goblins (and either tracking them down on their own for loot or getting hired). Or possibly it could be used with the PCs being from that village, being a scenario for Beyond the Wall and Other Adventures

At any rate, while unlike the goblins in this, it won't set the world on fire, it's a solid, well done module at a decent price.