Dungeon of the Selenian Conclave Review — Something of a Tease 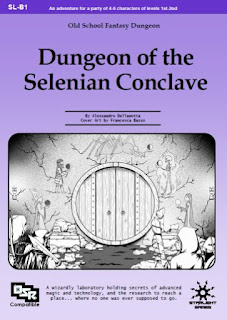 Dungeon of the Selenian Conclave is the second module from Starlight Games and Alessandro Dellamotta. Like the first, it's meant for B/X. While his earlier effort was for low-mid levels (4th or so), this is intended for 1st and 2nd level characters.

The premise is somewhat similar to Arsenal of the Warrior Princess, his first module, in that the party explores an abandoned wizardrly research facility. In this case though, rather than being for weapons research, it's research meant to enable travel to the Moon. While this is generally possible with a simple teleport spell in most settings, apparently not the author's. (I don't know about the Mystara moon, though I do remember that's where the Immortals had their city. It also has a second, invisible moon full of Japanese cat people).
Essentially the research facility was run by five different mages, each with thier own personality which is reflected in their various sections of the dungeon. There's an aranea (a spider lady), a prismatic mage (which is a bit odd as I don't recall that the prismatic spells are even in the Companion set, much less B/X), a failed lich, a werewolf, and lastly a dwarven (not gnome as you might expect) artificer rounds out the wacky crew.

There is something of a plot setting up the dungeon crawl — it's partly the lair of a very small band of orcs that have raided a village, kidnapping some members and the village wants them returned. But that aspect is largely just an excuse for them to go into the dungeon in the first place and is relatively easily accomplished.

The dungeon is basically an octogon with several different wings of two to four rooms each. Either common areas (like the servants wing) or the quarters for the various mages. There is a second floor which is part of a Moon Gate, but somewhat curiously, it doesn't work and is mostly empty and kind of a let down.

On the other hand, while his first module featured stock monsters, this adds quite a few new ones. They are basically only given quick blurbs and stat blocks, though.  Which is more than adequate, but it's also nice to have full write-ups of new monsters. 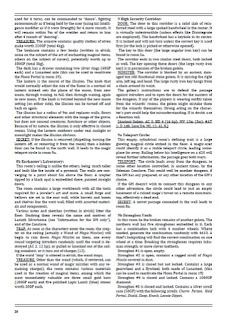 The module is clean and professional looking. It does fall prey to my pet peeve, being set to "Single Page, Continuous" and a "Fit Width" view which is annoying on a computer monitor. Other than the cover, there's no art. While this understandable given how little money OSR modules bring in (in my experience it's lucky if it covers even stock art), it does make things a bit harder to read, you need a picture of something occasionally to sort of anchor the text to, otherwise you drown in a sea of it.

Dungeon of the Selenian Conclave is exceptionally well done with regard to its contents. Excellent descriptions, varied and unique treasure. Despite this, it's a bit of a let-down, while so much of the module is unique, a lot of it is kinda dull.  And it's a bit of a tease. If you play a module about moon wizards, you ought to actually get to go to the moon. Hopefully that will happen in a sequel.