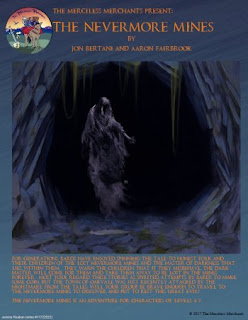 The Nevermore Mines is an adventure module from The Merciless Merchants for the AD&D 2e retroclone For Gold & Glory, meant for characters 4th to 7th level. Unlike a lot of OSR projects that are single person efforts, it's actually done by a number of people, written by Jon Bertani with Aaron Fairbrook and Mark McAllister, who also do maps and editing respectively.  An OSR product with editing? Who'd have thought. It's 56 pages and ordinarily goes for $5.95 in PDF, but I got it on sale for only $3.

It's meant to be a Halloween themed module, or at least inspired by it. The basic premise is that ages ago, some dwarves imprisoned an ancient evil in some mines, which they then abandoned. Then humans came along and re-opened the mines, including breaking open the sealed "Do Not Open" area and of course, the ancient evil ran amok. But they eventually realized their mistake and re-imprisoned the ancient evil. Only they didn't do as good a job of it as the dwarves and the ancient evil can get loose every "Harvest Moon". And he does, not just committing atrocities, but recruiting evil followers that can harass the nearby town year round. 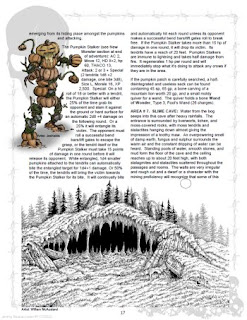 So presumably the PCs step in to end the evil. Despite this, the adventure is not overly linear, with a minor sandbox element. There is smallish hex map with ten locations that PCs can encounter, two of which are mini-dungeons that PCs can explore: some barrow mounds and a slive cave. Or they can choose not to and move to the main dungeon, the mines the evil is partially imprisoned at. No magic gizmos to find, just go there and kill him.

The main dungeon is about 30 to 35 keyed locations spread across two levels. Besides the bad guy (which is a human possessed by a spell casting devil), it features a lot of spiders, evil clowns, a new variant of gargoyle, and a hag. A good portion of the mines are empty, save for contents that the room was used for. Laboratory, kitchen, dining hall, etc.  This is offset by the suggestion that the villain not be a static encounter, but harass the players as they explore the dungeon.


In all the encounter locations I am impressed by the level of detail. Virtually every monster has a proper name and a background. For instance, there's not simply a wraith and a stat block, the wraith has a name (Peillot) and has a backstory as to why he's in the cave.  While some might find it overly verbose and unnecessary (those that champion the one page dungeon format), I think it really adds a lot of life into the module, making it seem more real and less just something out of a game (even if it actually is).

While not particularly graphic, it's perhaps not suitable for young kids, featuring ghosts of children that were tortured to death and a woman kept as a sex slave. And as mentioned, the evil clowns. It is a Halloween themed adventure, so fitting that it's a bit dark.
Besides the adventure and its new monsters (five) and magic items (four), also included is a "template" (essentially a "kit", 2e's answer to subclasses) for a Shield Maiden. Haven't used it, but it seems a bit fiddly, giving a designated person an armor class bonus vs one attack every round. On the other hand, the rest of the class is better, featuring a less fiddly alternative to barbarian rage (basically just a to hit/damage bonus a number of times per day, both based on the level of the shield maiden).

Despite the 2e nature of the module, it's readily usable with other editions. For instance, this is a stat block

The PDF can probably be best described as overly enthusiastic. They seemingly bought a lot of stock art and were apparently determined to use as much of it as possible. As a result, the PDF is oversaturated with art. Almost every page has at least one piece of art, many have two. Although two column text is used, there is sometimes not a whole lot of text on a page because of all the art. And on two occasions, there are just pages with a large piece of art.

Between all the art and color maps, this is a module you will be using as a PDF on a tablet or computer, not printing out. Still, they have it default to Single Page and Zoom to Height, which is always very welcome. Also nice that the large wilderness map is all on one page, rather than being broken up.

As mentioned, the maps are in color and are more reminescent of the very late 2e ERA or 3.x era, being almost more pieces of art than practical maps. They are also somewhat pixelated, as if they were drawn in 640x480 or something and blown up. With that said, they are readable, just not as clear as they could be. They also aren't copiable to clipboard, so if you want to use them in a virtual table top, you'll have to take a screenshot of the PDF.

The Nevermore Mines is a really nicemodule done with a lot of enthusiasm, offering a lot of value and a really good adventure even at its full price, $5.50.
Posted by Jeremy at 1:26 AM

Email ThisBlogThis!Share to TwitterShare to FacebookShare to Pinterest
Labels: For Gold & Glory, Review, The Merciless Merchants, The Nevermore Mines