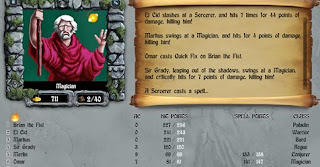 I actually had no idea this was in the works (I stopped following the Bard's Tale IV Kickstarter when they announced Sean Reynold's was involved. Call me petty, but I've still got a grudge against him from the last TSR days when he served as their internet enforcer, harassing people with fan material).   While probably my favorite old CRPG was Might & Magic, the Bard's Tale was up there. Early on it was pretty similar to Wizardry using a D&D-ish system.

The Bard's Tale came from about a dozen years ago, the action-RPG with Cary Elwes actually had the original BT games in it, but they were emulated Atari ST versions. This is an actual re-master and features an automap and other modern amenities and apparently some new graphics for female PCs.

It'ss available for $15 at Good Old Games and Steam .  Right now only the 1st game is in it, but they'll add the other two later

One of the neat things about TBT was you could import characters into the next game. Like with the Gold Box ones. So I can remember some of the names, even.  Murphy the Monk, Pat the Paladin, Omar the Great, Magic Max, Barry the Bard. I had a half-orc hunter (assassin) that I can't remember the name of, and presumably a warrior (fighter)