Wyrd Ways of Walstock Review — Rush to Save an Absurd Town 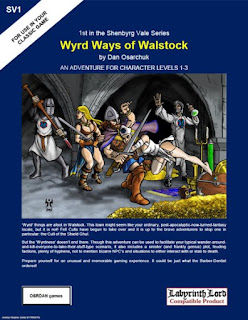 Wyrd Ways of Walstock is the first (and maybe last, since it came out in 2017) adventure from Dan Osarchuk and OSRDan games, who has produced a number of supplements called  Divinities & Cult(which I do not own). While it's an adventure (and meant for 1st to 3rd level characters), it's largely a small town that happens to have a dastardly plot going on that the PCs will presumably get caught up in and presumably try to foil. The tone of the module veers between satirical and light hearted. The villain of the module is a cult that worships the arch devil of health insurance, and there's a long (and depressingly adequate) description of the town hospital.

Besides that cult, there are several other factions at work in the town. You have another cult, this one dedicated to the demon lord of education; two different large extended families; town council and watch; a knightly order plus two different churches, that of Tyr and Minerva. And speaking of that, although written for the Labyrinth Lord rules, it does have a number of 1e (or Advanced) references, like the arch devil and demon lord and paladins, as well as using the author's Divinities and Cults products.

At any rate, the PCs presumably will want to foil the cult's plot, which is to take over leadership of the town. Rather than just hiring mercenaries using all the gold they apparently have, they have a multi-pronged attack of assassination and mayhem. This happens only a couple days after the PCs enter the town, so it's quite likely they will be reacting to the events, rather than somehow anticipating them. 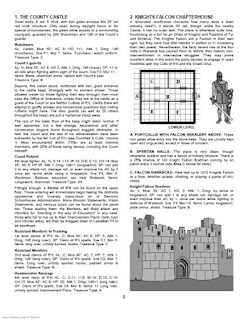 Or perhaps they won't. The module itself says "hopefully the party will succeed and won’t run away screaming!", but realistically, there's not a lot of motivation for the PCs to get involved. No one in the own in particularly likeable. No one actually hires there. There's always the call for treasure, but outside of one room in the hosptial, which has 428,000 gp, treasure is largely incidental, with no specifics given, just a "Treasure Type" in a statblock that seems to correspond with the school grade system, not any treasure listing that I know of.

Still, the town is fairly well described, including tables for generating random townsfolk and encounter tables. How appealing it will be to you or your players is probably determined if you find the town having a dentist named Dr. Chohmp hilarious or stupid, since that sort of humor permeates the entire product. There are some interesting differences from normal fantasy towns, there's a mail service (actually a part of the evil plot) and a theater.

The PDF features an original cover depicting one of the superhero nuns in action, and seemingly original, if more generic, interior artwork. The map of the town seems to be a photo of a hand drawn map with some trees added digitally for some reason, while the interior maps of buildings are plain white squares. 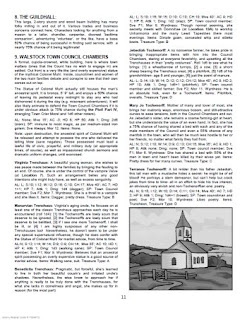 While I think the humor will be hit or miss depending on your taste, the problem with Wyrd Ways of Waystock is that it's an investigative scenario, not really an adventure. But even then, I don't think the "you have two days to foil a plot you know nothing about in a town you don't care about" really works.

It would have been better to introduce the town, have some adventures there, introduce PCs to the NPCs, then have them learn about the plot. Forcing it on them from the start just seems putting the cart before the horse.
Posted by Jeremy at 10:18 PM