Halls of the Bonelord Review — No Frills Low Level Dungeon 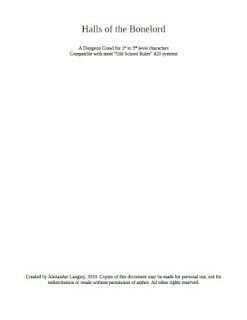 Halls of the Bonelord is a short-ish adventure for low level characters by Alexander Langley.  It's actually not that short, 20 rooms, but it's in only 5 pages (including map and title page), so the level of detail is fairly sparse, though not nearly as found on the one page dungeons. It's aimed at lower level parties and perhaps even beginners, and while it says it's intended for one sessions/foray, it does only have about seven or eight combat encounters.

There's really not much of a backstory about the titular bonelord. He's not even the toughest undead in the dungeon, merely being a three hit dice skeleton, though the PCs probably won't want to fight the other (a shadow), should they even find him (he's in a secret room).

Other than a very small section the undead live in, a small section of the dungeon taken over by some kobolds. Unlike other modules that have come out, these are not super tricky, trapped everything to the teeth kobolds, but run of the mill sword fodder. Nearby, but not friendly to the kobolds, is a giant snake (with no stats given). 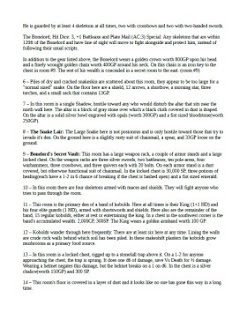 The dungeon map itself is well designed and non-linear, and rooms actually do have descriptions, there's nothing to the dungeon besides combat. The only real variation is that in one encounter with skeletons, they are shaped like dogs. There is one potentially nasty scrape with green slime.

On the other hand, the designer was not stingy with treasure. There's a number of valuable items of loot, as well as a fairly large cache of silver owned by the Bonelord himself. Nothing original when it comes to magic, simply a +1 battleaxe and some potions.

There's no art in the PDF. The map is plain, but well enough drawn. The text is easy to read on my tablet, and I consider that the most important thing.

On the one hand, Halls of the Bonelord gets straight to the point, and is well enough designed. On the other, it really doesn't offer anything original or novel.  I probably wouldn't want to center an evening's game session around it, but should you need a dungeon for when the PCs stumble across some ruins, it would fill in nicely enough. And it's only a $1

Email ThisBlogThis!Share to TwitterShare to FacebookShare to Pinterest
Labels: Review