Old School Class: The Necromancer — Solid Addition to First Edition, But Does It Have a Niche? 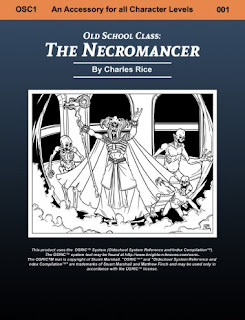 The Necromancer is one of those fantasy archetypes that really didn't exist in mythology or folklore (the name really just means someone who talks to the dead), but something everyone knows immediately what is.  As far as I know, there wasn't one for AD&D 1e, though 2e had a whole book devoted to introducing the class (Complete Book of Necromancers) and one described in the Diablo adaptions. Old School Class: The Necromancer from Charles Rice (a notable d20 author who also did many supplements in the early days of OSRIC) is aimed to fill that void for 1e in a 20 or so page PDF priced at $2.50.

It's built along the lines of the illusionist, having 7 levels of spells, which are a mix of existing ones and original ones just for the necromancer.  The descriptions of these new spells (almost 40) make up the bulk of this PDF, though there's also a small section on new monsters and magic items for the necromancer. 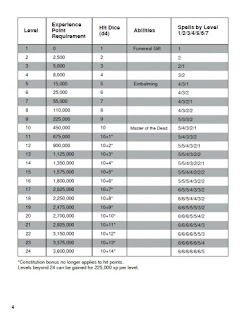 Spells are pretty much what make a spellcaster. Not surprisingly, most of the necromancer's spells deal with either the undead or the negative energy plane. There are several spells to animate the dead (basically one for each spell level, for increasingly powerful undead), control undead, and taking a page from Diablo, spells to destroy controlled undead in a violent manner that may damage foes.

Perhaps a bit out of character is a spell, Black Mass, which essentially has the Necromancer sell his soul for the service of some demons. Another high level spell, Empty Hell, which raises an undead army for a small amount of time, seems more like it should be a class ability, akin to the Barbarian's ability to raise a horde.

To a large extent, a necromancer is very reliant on there being undead or bodies to animate. This aspect perhaps makes it somewhat unsuitable for a player class. Another drawback for players is that at 1st (or even 2nd) level, it doesn't seem particularly useful.  Magic-Users can be deadly at first level thanks to the Sleep spell. It might not win more than one encounter, but it will win one encounter. Illusionist have Phantasmal Force to work with, and Color Spray isn't shabby. 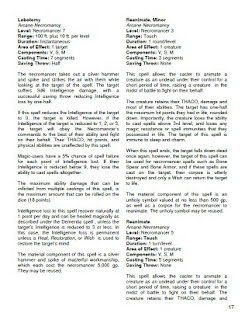 At higher levels, the necromancer does seem suitably potent, perhaps overwhelmingly so if delving into a catacombs or tomb, where he can cast a spell to take control of undead, then another to have them destroy themselves. On the other hand, they are necromancers! That's what they do. Past products have shown the author has a strong understanding of the first edition rules (and game design in general), so I'm trusting they are not out of line. 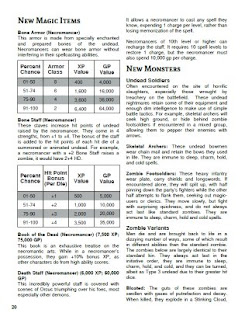 The new undead are basically just tougher variants of existing skeletons and zombies. Some are essentially soldiers (and much tougher at 5 HD), while the new zombies are 3 HD and have special abilities based on how they were killed (mostly).

The PDF is plain but very readable with no art other than the front piece (which gets repeated later on).

Old School Class: The Necromancer is a fine addition to any first edition game, in terms of rules, but finding a practical use for it in your game might prove a challenge. Would a player want to play one? And as villains, they seem more dangerous to undead than parties, at least in a straight up fight. They might be better villains in the background..