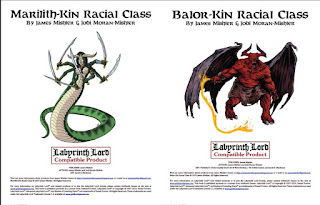 As I've said often before, personally I think Basic D&D's strength is that it is not AD&D and has separate monsters, and multiverse, which doesn't include demons (or devils for that matter). However apparently a lot of people just want to play AD&D with Basic rules, and presumably in this product's case, people who also want to play as demon-kin.

Balors are of course, originally the D&D version of the Balrog, with the name changed after Tolkien's estate complained. It is a big, winged, fiery devil looking demon. And that is the case here, they start off at 6' + 1d12 inches and grow further each level, eventually reaching large size where they can wield two-handed weapons in one paw. They can also encase themselves in fire, causing fire damage to nearby creatures and doing extra damage on their attacks. They can also fly, and gain the ability to use spells as they increase in level (with the spells being gained randomly). Also improving as they level is their armor class, down to two. 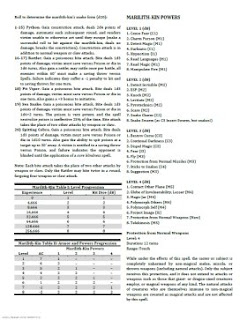 The Marilith is the Type 5 demon, the six armed lady whose lower body is that of a giant snake. I'm not sure if it's from mythology per se, but clearly influenced by Indian mythology (and probably that Sinbad movie). Unlike the Balor-kin which starts off as monstrous, the Marilith-kin starts off as more or less human and then slowly turns into a monster, gaining a second pair of arms at 3rd level and the third pair at 6th. The snake part starts at 4th level (and the type is random, different types have different attacks), but only as an alternate form that only lasts for 1 turn per level per day. Their armor class also improves (more so than the Balor-kin) and they also gain spell casting ability.

The Balor-kin has a fairly hefty experience point cost, needing 5,666 to reach second level. The Marilith-kin ia a little better, needing only 4,666. When comparing this to the plain old fighter, this is almost 3x as much, but it's comparable to the Elf class (which is essentially a fighter/magic-user). The spells are somewhat limited compared to the elf, but the hit dice are better. The Marilith-kin tops out at only 8th level, while the Balor goes on to 10. I think this is perhaps a bit low in the Marilith's case, though it does tie the regular LL Halfling (who tops out at 8th and lacks any useful abilities, much less spellcasting)

The PDFs are pretty plain and use a smidgen of stock art.  Apparently there's very little Marilith stock art, what there is is also the less human, more snake like one,.

Both the Balor-kin and Marilith-kin seem well enough designed to fit fairly seamlessly into most old school RPGs. Setting? That's another matter. The Marilith-kin is fairly human, but the Balor-kin could pose problems, since it's basically a 7' tall demon. Even if it wears a hat and trenchcoat, might not get a warm reception in most places.