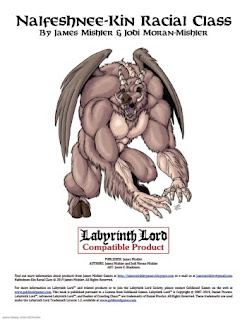 The previous two demon-kin racial classes were approaching human in form (less so with the Balor), but the Nalfeeshnee-kin is clearly quite monstrous. At lower levels its smaller stature might allow it to pass as a really ugly dwarf of gnome, but it would have to rely on its polymorph self ability to fit in anything resembling a standard campaign. 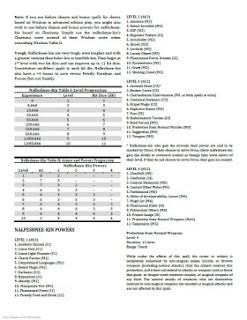 As with previous demon racial classes, they have natural armor class and natural attacks that improves as they level. Rather than the magical powers being fixed (as with the actual monster), it's treated like normal spellcasting ability, with a number of spells per day per level (starting with two first and reaching four first through fourth spells at 10th level). The spells are picked at random (12 different ones per level).

This comes at a very steep experience point cost, 5,666 to reach 2nd level and then following the usual doubling or so, up to 10th level and 1,500,666 xp which is the max. Based on my experiences with the UA Barbarian in 1E (and its 6000 xp for 2nd level) I probably would have spread it out over 20 levels, staggering the hit dice with a +1 every other level and kept the xp costs closer to normal.

This would also help the Nalfeshnee-kin's attack, since it uses the fighter table, while the actual Nalfeshnee of course uses the much better monster table (with an attack more or less that of a 13th to 15th level fighter). But this way keeps it closer to B/X norms (14 levels) as opposed to Labyrinth Lord (20) and its only a worse than the Elf, so I might be wrong. I am mostly a 1e DM/player.

As with pretty much all James Mishler PDFs, functionality and readability is the priority over fanciness.


Perhaps the biggest stumbling block this faces is "Does your game need a Nalfeshnee class?". Its polymorph ability would actually make it fairly playable and its abilities would be fun to play, so the answer to that could very well be "Yes, it does."